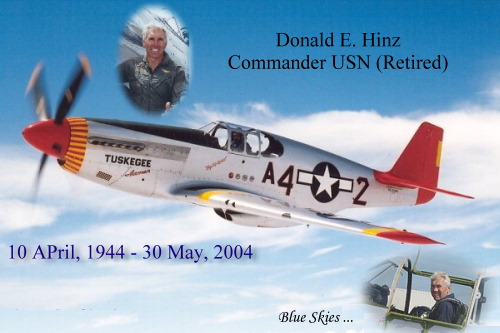 Saturday 29th May, 2004 this beautiful P-51C, 42-103645, owned by the Confederate Air Force crashed during an airshow at Red Wing, MN. The pilot, Donald Hinz, was conscious and air lifted in very serious condition to Regions Hospital in St. Paul. Sadly, Mr. Hinz died early Sunday morning from his injuries.

The P-51C was performing fly-bys for the "Wings of Freedom: Salute to Veterans" show at Red Wing Airport in MN. Mr. Hinz had just completed a high speed pass. He then radioed that he was having mechanical problems. Crew members on the ground and in the air offered words of assistance as Hinz battled with the wounded aircraft. He was low and in an area with houses. He picked out the best location possible under the circumstances and then crashed under control in a semi-rural area close to the airport. He was able to avoid power lines and houses very close to the crash site. Less than 30 seconds had elapsed since the start of the problem.

No one on the ground was hurt - a testament to great flying with more concern for others than self. The rare "C" model reportedly crash landed under control between houses. Reports say that it did not stall and/or spin. From photos of the crash it looks like it was a very rough ride as the wings were ripped from the fuselage which ended up on its side, with half of the horizontal broken.

The P-51C "Tuskegee Airmen by Request" was a very long-term restoration project by the CAF and quite an accomplishment to finish. But it is just an airplane. As long and hard as it was to complete this P-51C, another can be built. But a good pilot and friend cannot be rebuilt or replaced. Sadness is felt around the warbird community at the loss of Donald Hinz, 60, of Woodbury MN. He will be missed. Our thoughts and prayers go out to the Hinz Family and the CAF.

The CAF is always looking for help in their continuing quest to keep warbirds in the air. They are very active and will keep Don's dream alive and get this P-51 to airworthy status again. They are asking for everyone's support. Visit the Red Tail Home Page for more info on how you can help.