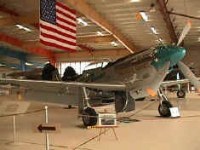 MacGuire, who moved from El Paso to a ranch in Marfa nine years ago, died of a heart attack, his family said. He was 80. Betty MacGuire, his wife of 58 years, said his interest in farming and ranching led him to buy properties in Fabens, Tucson and even Chihuahua, Mexico, which in turn prompted his lifelong passion for airplanes.

"He took up flying his own plane, an Aeronca K, in 1945, to get to these properties," she said. "He was still flying just last week." In 1989, MacGuire started the War Eagle Air Museum in Santa Teresa to display planes from World War II, the Korean War and the Vietnam era that he bought and fixed up.

MacGuire was buried Thursday in Marfa. An El Paso memorial service was held for him on Friday at the First Presbyterian Church, 1340 Murchison. Born in New York state, MacGuire attended the University of Texas at Austin, where he met his El Paso-born wife. After working as a mechanical engineer in Los Angeles and Milwaukee, he moved to El Paso in 1947. (End wire story)

John MacGuire, warbird owner and aviation enthusiast, will long be remembered for keeping many warbirds alive and well and for his contributions to the warbird community. Our condolences go out to the MacGuire family.