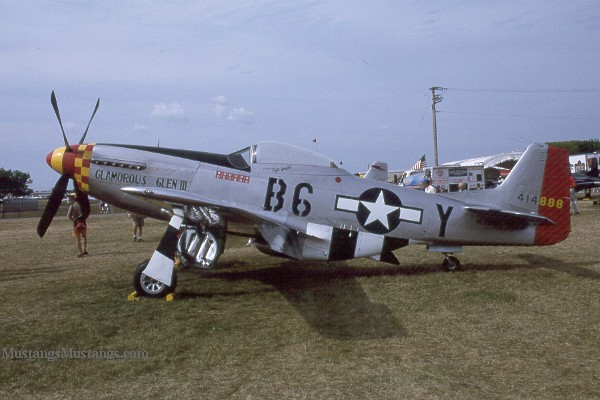 After departing Rowan Airport, P-51 45-11381, N551CB, owned by Gary Honbarrier was being flown by Jeff Michael (owner of 44-74976 "Obsession") on Thursday, 6th September, when the P-51 had cooling problems and lost power. After being vectored by ATC to the nearest airport, the engine totally quit, sending them (Jeff Michael and Butch Cauble) through the cloud deck. They came out at about 1200' and the plane was clear so they jumped! They are lucky to be alive from a very low altitude jump.

Not all pilots wear parachutes when just flying around, but many do when going cross-country. Parachutes and fast action saved their lives.

Very good news to hear that Mr. Michael made it out safe and so did his passenger Butch Cauble.

The P-51 was destroyed in the crash as a fire started on impact. Both the pilot and the passenger did an unbelievable job getting out and getting their chutes opened in just enough time for a "safe" landing. Michael was stuck in a tree about 35 feet up for a about an hour + and received injuries that were treated on site. Cauble was taken to a local medical center because of his injuries which included a broken arm. It was reported that Cauble hit the aircraft on the way out and his chute opened late and caused a very hard landing.