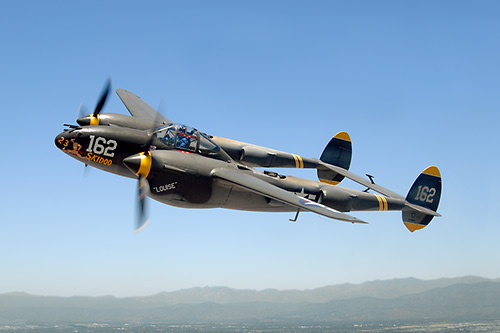 The show was held Saturday May 19, and Sunday May 20, 2007. Gates opened at 8am, and the flying started at 11 and ended at 4pm. Warbirds were everywhere, including the showcased P-38 Lightnings - three of them.

The Planes of Fame Air Museum does a super job keeping the action flowing with very little time between acts. The show ran on time and per schedule which is a big plus.

The musuem put together a flight with a ton of warbirds, or "gaggle" as they called it. Leading the pack were the three P-38s. Included in this flight were six or so P-51s, two P-47s, two P-40s, two A6M Zeros, an Avenger, two Hellcats, a couple of Corsairs, an SBD Dauntless, one P-63 King Cobra, a Bearcat or two, a Spitfire and Huricane, four B-25 Mitchells, two Wildcats, a Tigercat, a single Skyraider and T-28 ... and covering their six, was the B-17 Flying Fortress "Fuddy Duddy".

Wow, what a flight. They did several passes, then started the break to land in groups of four or five. The P-38's stayed out for their passes. Steve Hinton lead the group flying "Glacier Girl", followed by Kevin Eldgridge in the Museum's "Skidoo" and then Jeff Harris in Jack Croul's P-38. They pleased the crowd with several passes, both grouped and singles.

The show was not all warbirds. We saw a wing-walking act and the Tumbling Bear. The USAF performed an F-15 Demo followed by the USAF Heritage Flight which included the F-15, the P-38 and a P-51. The Navy joined the fun with a Legacy Flight with an F-18 and F8f Bearcat preceeded by the powerful F-18 Super Hornet demo.

The last group of the day was the Vietnam Era flights. Dancin' Birddogs, a Skyraider, T-28 and a Huey put on a great show.

The weather was nice, but very hazy in the morning making good photos hard to come by until after lunch. As far as temps go, it got into the low 80's with sunny afternoons and lows in the upper 50's at night - very pleasant.

Once again the Planes of Fame Air Show stands out as one of the premier events in the states. Get out your 2008 calender and mark down the third weekend in May. I'm not sure how, but they will out-do this year's show somehow.

For more information about The Air Museum 'Planes of Fame' and its events, please call (909)597-3722 or visit their website at:
Planes of Fame Airshow Homepage