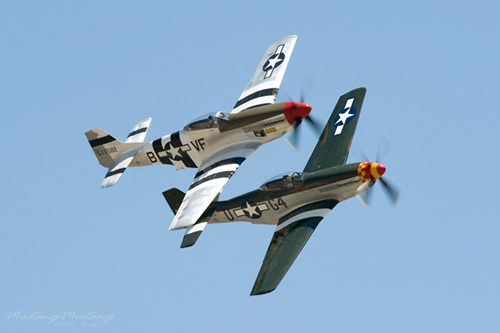 Wings of the Silver Screen
story and photography by Curtis Fowles

Saturday May 17, and Sunday May 18, 2008.
Gates opened at 8am, and the flying started at 11 and ended at 4pm.
Warbirds, some jets, more warbirds, light acro and more warbirds.

HOT! That describes the weekend well. With triple digit temps, every inch of wing shade was used up early on the ramp. 100 degrees was tough for us watching but what about those pilots? Flying in those temps is very difficult at best.

Chino, Planes of Fame is one of the finest warbird shows around. Oshkosh might have more, but the Chino boys know how to display their warbirds. All the museum's birds come out and several fly in to join the fun. The Confederate Air Force in Camarillo, Ca loans a few and some private owners on the field at Chino, Socal and Norcal add to the cause. The Planes of Fame also keeps some aircraft at their Grand Canyon location and some are flown in for the show.

The flying starts at 11am with a short break at 12:15 or so and then it is solid flying until 4:30. The museum does a really good job keeping the action going, very little if any slow time.

This year's theme "Wings of the Silver Screen" showcased the warbirds used in film over the last 50 years. One of the most famous shows was "Black Sheep Squadron" or "Bah Bah Black Sheep". Steve Hinton flew the museum's Corsair in that series many years ago. The P-40 and B-25s were used in the movie "Pearl Harbor" as were other aircraft. Many other museum aircraft have been used in film. Hollywood is just a bit to the northwest and there is very diverse terrain to use in California and surrounding areas. The most recent shoot was done in Mexico for a new James Bond movie. Hinton flew the Mig-15 and that will be cgi into an F-22.

Warbirds took to the sky several at a time during the sizzling afternoon in Chino. The fly-bys are very nice with a close in turn in front of the crowd. Great photo and video opportunities at this show. There were tail chases with P-40s and A-6M Zeros, one of which has the original engine pulling it along, and a Korean War tail chase with an F-86 (Hinton's favorite) and a Mig-15. There was a Black Sheep Formation with four Corsairs. That was very cool to see. Two P-38s also in the air with a couple of B-25s and a B-17.

The B-17 was a pleasant surprise with some killer flying around the patch. The bomber with a B-25 on its wing flew tight and low passes with high bank turns. Everyone got some good shots of that. In fact there was so much great stuff in the air, I forgot about the heat for a couple of hours in the middle. I settled in with my camera gear sippin' water every so often. By the end of the day, I thought it cooled done plenty. Then I noticed it was still 100 degrees as I was driving to the hotel. That was at 5:45 pm.

A very pleasant surprise this year was the addition of "The Horsemen". A two-ship P-51 routine flown by Jim Beasley and Ed Shipley. Ed is glued to Beasley's wing throughout the show. This is a must see air show act. I've seen it many times, but always want to see it again. They did a super job on Saturday, but had a mechanical problem on Sunday. They were flying the POF Museum's P-51s, Spam Can and Wee Willy II.

Young Steve "Stevo" Hinton Jr. was showing his talents each day as he was flying the highly modified unlimited racer "Strega" owned by Tiger Destafani. Stevo soloed in the museum's P-51 last year at age 19! He is going to school at Cal Poly and looking like he is being groomed to race at some future time. Groomed by one of the best in Tiger Destafani. Tiger has been looking for that just right someone to fill the pilot seat when he is done. That day is coming soon, but not this year. Stevo will practice at Pylon Racing School in June, but Tiger will race in September.

Of course you know that Steve Sr. was a famous race pilot and has been the unlimited pace pilot for several years now. For more info on some of the promising Chino kids of today, check out an article by Scotty Germain in Warbird Digest a few months back.

Mark Watt was flying "Dreadnought", nicknamed "The Buick" around the course at Chino with right turns. He and Stevo put on a good show.

Numbers of warbirds were a bit down from last year. Missing were: Skyraider, Tigercat, King Cobra, TBM Avenger (did not fly), and also not showing was a PBY Catalina and the Navy F-18 Super Hornet Demo. Seeing the PBY fly would have been a treat. I was thinking about the excellent collection right on the field at the Yanks Air Museum. If they could work things out and bring out those birds, wow, that would be the best warbird show in the U.S. The Yanks warbirds are kept in airworthy condition, but are not flown. It would take a little bit of work to get them in the air again, but not anything major.

Even with reduced numbers, the show is big - certainly the largest and best warbird show on the left coast of the USA. So, get out some paper, draw a warbird, right down "Chino, 3rd weekend in May 2009", pin it up on your fridge next to your kid's report card and make plans for next year.

For more information about The Air Museum 'Planes of Fame' and its events, please call (909)597-3722 or visit their website at:
Planes of Fame Airshow Homepage