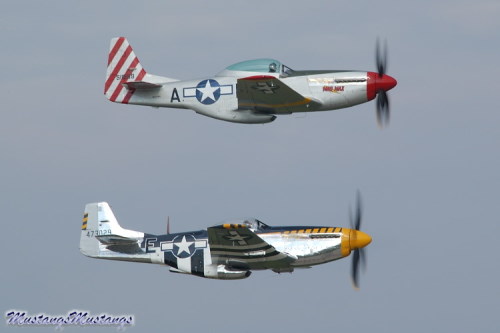 They have two runways that are in use and they use both to keep the show moving and not boring. One of the performances you do not want to miss is Jim Franklin and his Waco. I know, big deal another loud biplane, but this one is different. There is a jet engine strapped under the Waco! This thing takes off and just cooks. Franklin is also a part of the three who perform "Masters of Disaster". It is like a freestyle aerobatic event with some jet trucks or cars thrown in for fun. It is very entertaining. I only took a few shots of it, I was too busy watching.

There was a Harrier performance that was fun to watch. The pilot performed a vertical landing and take-off as well as a short field rolling take-off. Be warned ... it is very loud as the Harrier is using the vertical jet blasts.

The best performance was (I might be a bit biased) "Dual Mustangs" performed by Lee Lauderback and Ed Shipley. They fly a formation performance full of plenty of vertical manuevers, loops, cuban 8's, big barrel rolls and the like. They move the formation around to a stacked formation which is very cool. I was impressed with the precision of the formation throughout the manuevers.

There was also some mock air racing done with the Super Corsair, a Sea Fury and a P-51 Mustang. This year, Jimmy Leeward was flying Bob Odegard's "Dazzling Donna". Leeward's P-51 was down for some maintenance work. The race course is a bit different from Reno in that the racers pitch up at the end of the home stretch and dive back down at the beginning of the home stretch. If I remember right, they are making right turns, not left turns like Reno.

Each show there is a huge warbird flight that starts with the trainers and goes right on through to the heavy iron. Many mustangs are up during this flight. You will have good opportunities to get some photos. This year, the skies were grey during many of the afternoons, making it a difficult backdrop for most warbirds that are painted grey or polished.