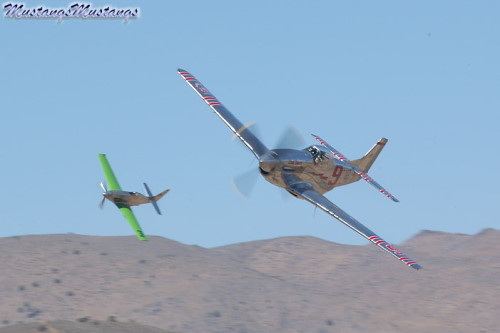 Welcome to Reno, home of the National Championship Air Races. During the next week of air racing, over 200,000 aviation and race fans will converge on one airport, Stead Field in Reno. The local economy of Reno will enjoy the $50 million or so poured into the community.

This is the 41st year of the National Champsionship Air Races which started at Sky Ranch in Reno, then moved over to Stead Field in 1966. Some new stuff to 2004 is the addition of the Red Bull Race, and record purse of over $1 million and the chance to break a record and have a 6-peat champion. P-51 Dago Red has won the last 5 races! Of course we here at MustangsMustangs are hoping to see a P-51 Mustang break another record, but all of us are aviation fans and good flying and good racing are fun to watch (even from a Bearcat or Sea Fury).

The unlimiteds and the jet class fly the outside course which covers about 8.4 miles and 8 pylons. The T-6 course is 5 miles, while the sport plane course is 6.4 miles. The biplane course and IFM courses are both 3.2 miles. While the skill and determination are in full swing in all the classes, the unlimited class is what it is all about. Last year was a milestone with Dago Red turning and burning for that elusive 500 mph race! The focus of this report is on the unlimited class.

This year, history could be made if Dago Red with pilot Skip Holm can win the Gold. Owner Terry Bland has this air racing team dialed in very well. That would be six years in a row and a new record. Dago Red is a highly modified P-51 Mustang that has been tuned and set up for very consistent high-speed laps. But wait, the huge round-engined Bearcat is out there and coming back from a few years of trouble. Overcoming financial set backs and mechanical problems, that beast is very hungry for a win. Number 77 "Rare Bear" is that Bearcat as you know. Rare Bear is not the only radial-engined racer that is chasing the tail of Dago Red. The Sea Furies like September Fury, Dreadnought along with Fury and Spirit of Texas are close behind. There is also a Tigercat scheduled for this years races but will probably not be in contention for the gold.

There are several other P-51s that want to medal at Reno, like Voodoo, Miss America, Ridge Runner and Merlins Magic. All should be in the mid 400's if they can stay healthy. That speed is fast enough to win, if the top qualifiers break or cut any pylons or deadlines. Precious Metal is a very highly modified racer with some P-51 design. It has the contra-rotation props powered by the Rolls Royce Griffon engine and has been running in the Silver but wants to jump up to gold. Since former Reno Champion Tiger Destefani and "Strega" have been absent the last few years, Dago Red has been topping the P-51s and all other racers with consistent high speed flying. Look for some very tight racing from the top two favorites, Dago Red and Rare Bear. If healthy, I don't think anyone else can catch them, but don't forget that many variables are in place and just about anything can happen.

It takes an incredible amount of work just to get here at Reno with a healthy racer. One bad break could take you out of the running. You may see a leader pull out with a blown engine, pylon cuts that take precious seconds off the race time and superb flying and pit crewing which can lead to surprises from the rest of the pack. These race engines and airframes are pushed hard to achieve top speeds and you will see some of them break. For instance, the Rolls Royce Merlin was used in WWII with a maximum 5 min war emergency power setting of 67 inches of maniford pressure. The top merlins are pushing 120-130 inches and stressing every part in that engine. If something with the engine breaks, it is usually big because of the workload it is under during the race. Sometimes the crew can patch it up and get it ready for the next days heat race, other times an overnight engine change is needed to just finish the races. Yes, some crews bring spare merlins with them, just in case. So, strap yourself in tight, clear prop and let's get going.