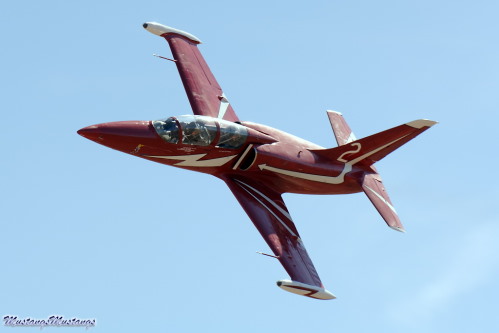 If you have not been to Reno in several years, you will notice some changes. One of them is the addition of the Jet class, another is the elimination of the T-28 class. The jets, all of them Czech-built Aerovodochody L-39 Albatros's, cruise around quietly at over 400 mph. Speed is a little deceiving because of the lack of noise you get use to from the unlimiteds.

These jets range in speeds from just under 400 mph to over 460 this year. Qualifying saw Sal Rubino (MustangsMustangs favorite) jump out to the top of the heap with a blazing 465.7 mph! Nearest competitor was race veteran John Penney in Pip Squeak at 447.2 mph. Behind Penney was one of the most experienced racers at Reno, Dave Morss in #1 Tejas Pistolero at 444.7 mph. Dave also races the sport class and the unlimiteds.

On Thursday, Rubino wanted that 1st spot back. There was some good racing but Sal buzzed us photogs around pylon #2 and was charged with a cut and a 12 second penalty placing him in 3rd for that heat. John Bagley also cut a pylon pushing him down to the bottom of the pack.

Friday, everone finished as they did on the first heat: Penney, Rubino, Morss, Behel, Bagley, McGee and Sonday. Speeds for the top three were 448, 434 and 431 mph. Sunday's Final looked like a carbon copy of Friday's heat, but Bagley took over 4th from Behel, everyone else stayed as they started the race.


Some folks are not real keen on the jet class but I like the change of pace. A few years back when they had an exhibition jet race, they had a few Mig-17s flying low and fast (and yea, turning left) and some L-39s. Do I hear F-86? An F-86 chasing a couple of Migs would be fun to watch. Or how about an unlimited jet class? Whoa, the F-14 was just retired. A full-afterbunner race would be louder than the T-6s. Now we're getting somewhere.

The race course gets real tight when you break 500 mph so the safe max speed will or already has been determined for the course as set up today. The fastest unlimiteds and jets use almost all the space right up to the deadline coming around pylon #6. I'm afraid the F-14 class will have to wait.

The L-39 speeds have not surpassed the fastest unlimiteds yet. They have been steady since 2002 and have room to go faster and grow in numbers. Total qualifiers for 2005 was seven. The L-39 is very dependable and (from what I'm told) is fairly simple and straight-forward for a jet aircraft. You get the speeds of the big prop warbirds without all the old engine problems. But, you know, I just can't get used to the smell.

I guess I'm a bit partial to the smell of spent avgas coming out of the stacks of a Rolls-Royce Merlin V12 :)