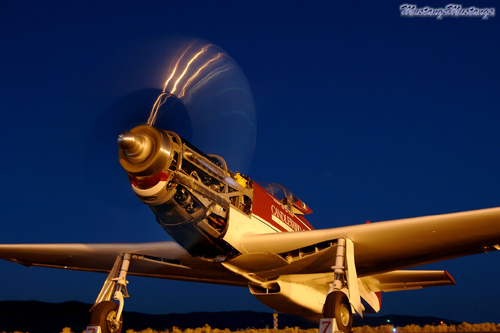 Each entrant at the Reno Air Races must race the clock on the course and record their fastest time. This seeds each racer for the heat races that begin on Wednesday (Thursday for unlimiteds). For the unlimiteds, the top six qualifiers do not have to race until Friday, allowing them needed down-time.

For the sport, T-6 and unlimited classes, there are two qualifying sessions on Monday and Tuesday but only one session during Wednesday morning. All other classes get one session each day. For the unlimiteds, you can better your time on a later session if you want to try and move up in the field, but only after all have qualified. Racers are cleared onto the course with usually no more than three at a time, maybe four while others wait their turn overhead or in the vicinity of Stead. They can round the pylons without the clock, when they are ready they call for the clock and are timed for one or two laps after crossing the home pylon.

Once in a while you get a mix of racers on the course at the same time. They do try and "space out" (not the blonde thing) and give each other room to fly but there are a few passes that happen. You will notice a pic of Dave Morss in the P-51A Polar Bear appear to be holding off Dreadnought and Brian Sanders.

Missing from the list is Strega, the highly modified P-51D owned by Bill "Tiger" Destafani and flown this year by Curt Brown. Early in the week had a radiator problem, once fixed, they found metal in the oil screens. They switched out engines and got it running by Wednesday night (sounded awesome) and flew early Thursday morning. Strega was paired in the medallion heat for Thursday. But, ... bad news after the flight on Thursday morning. The second race motor was "making metal", which is bad. Culprit appears to be bad main bearings (same on both motors). Strega is out :(! Although out, the Strega team seemed to be in good spirits, making the best of a broken week. They even loaned out their prop to their second favorite racer. More on that later.

Also missing is the red, white and blue P-51D of Brent Hisey, "Miss America". She flew on Monday but did not clock. On Tuesday during qualifying Hisey and the MissA Team was dealt a tough blow when the merlin coughed very hard and blew out the underside cowl and left the intake trunk dangling from the firewall! Hisey did a great job getting the sick bird back to the runway. On short final the trunk finally fell off and Hisey landed safely. Then the crew had to go hunting for parts sprayed over the course. Miss America is out.

Surprising was the good qualifying speeds of the two rookies, Fred Cabanas and Steve Patterson, both qualifying over 400 mph. Not bad (even if they use Sea Furies :). We have a rookie P-51 with a veteran pilot, that's the inclusion of Gerry Gabe's P-51A flown by Dave Morss. They flew with a stock Allison at full power most of the time turning mid 300's - not bad at all. Take a look at some of the photos of the underside of Polar Bear. The used up some extra oil that ran down the bottom of the OD Green racer. I believe that was from an added oil filter and not a major engine problem (well ... losing oil can be a major engine problem). The allison ran good during race week. How about a couple of allisons on a P-38 next year? Sure do miss Lefty. Better yet, anyone got an F-82?

In the T-6 Class, Al Goss in "Warlock" led at 237 mph followed by Mary Dilda in "Two of Hearts" and Nick Macy in "Six Cat". The T-6 class is very close between the 21 racers. Top speed was over 237 and slowest at 197 with the majority in the teens. T-6 class is ear-pluggin' NOISY but they have some good close racing and is very fun to watch. T-6s were designed for training and not for speed. That is very evident when you see the popular use of race tape over the fuselage and wings sealing up all those speed-stealing gaps.

The Jet Class saw some good speeds this year. Qualifying in 1st was a #104, nicknamed by Jim "A Big Ten Four", flown by a great guy Sal Rubino. Sal pumped out 465.656 mph! Jim Martinelli took some tricks out of his black bag to get the L-39 moving that fast, along with a great line by Sal. Qualifying 2nd was John Penney in "Pip Sqeak" #2 at 447 mph. Penney is no stranger to air racing. He also flies the bearcat "Rare Bear". Sal will have to work double time to keep Penney behind him. Third in jets was Dave Morss in "Tejas Pistolaero", #1 at 444 mph. Total racers in this class was seven.

The Sport Class is very fast. John Parker in the "Thunder Mustang" qualified 1st at 361.921 mph! In second was last year's winner, Darryl Greenamyer in Lancair #33 at 358 followed by Kevin Eldredge in one of the two Nemesis NXT racers. Eldredge clocked in at 336 mph. Lots a cool-looking designs and paint in the class of 27 racers. Lancair, Glasair, Thunder Mustang, Nemesis NXT, Swearingen, Harmon Rocket and Vari Eze are most of the types making up the sport class.