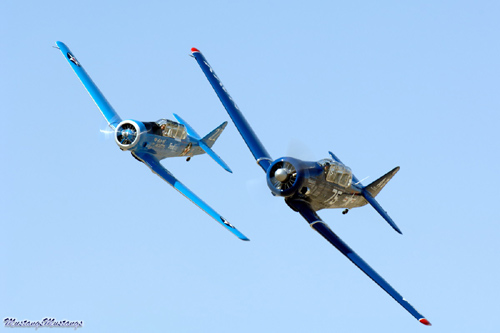 Want some noise and some close racing (and some more noise)? Come check out the T-6 class. They squeeze every mph out these drag-laden warbird trainers. Race tape is everywhere, covering every gap, seam and hole on the T-6. Also many of them seal off the rear canopy. If you are taking on any unwanted draft, it will slow you down.

The cool thing about the T-6 class is the closeness of the speeds. Racers' speeds are usually from the low 200s to the high 230s mph. Plenty of good racing action to see from Wednesday to Sunday.

Al Goss in Warlock held the high qualifying speed and the pole all week. Al qualified at 237.4 and Mary Dilda in Two of Hearts at 236.9 mph. Third highest qualifier goes to Nick Macy in Six Cat at 233.9 and fourth was Tom Campau in Mystical Power at 233.5 mph. Those four were the only T-6 racers above 230 mph. James Good was the only racer to qualify in the 220s and the large part of the field was in the teens. Only five racers were below 210 mph.

On Wednesday's heat, Jim Eberhardt and Keith McMann ran real tight during the race with Eberhardt in #30 Archimedes coming across ahead the #64 Red Knight of McMann. Thursday showed us some tight racing up front in the Gold heat with Al Goss holding off Mary Dilda. Mary's #22 Two of Hearts was parked right outside Goss's right wing (and slightly behind). Very nice flying. They both turned over 239 mph with Goss at 239.9 and Dilda at 239.4 mph! That is the fastest speeds for the week. The weather was spectactular this day with the wind only a factor in late afternoon.

Friday's Bronze heat was close with Gary Miller taking first and Chris Rushing very close behind. Keith McMann and Jim Thomas also battled for third with only .3 mph separation. The Silver heat was also close up front as Wayne Cartwright crossed ahead of Joey Sanders. At the bottom of the heat, John Zayac and Gene McNelly were very tight with only .1 mph between them.

Saturday holds the Bronze final and the last Gold heat. Goss and Dilda locked horns again and finished side by side with Goss slightly ahead. Both speeds at 237.4 mph. The rest of the Gold heat was spread out. The Bronze final had the top two jump out and pull away from the field. Chris Rushing in #42 Sugarfoot finished 1st and Gary Miller in #55 Trophy Hunter took 2nd.

After following Al Goss around all week, Mary Dilda decided it was time to change that. She finished 1st in the Gold Final at a very steady 237 mph. Goss had been doing that speed or better all week but fell to 233 mph on Sunday and settled for 2nd. The top six in Gold finished as qualified except for the switch in the top two. Very good week of T-6 racing.