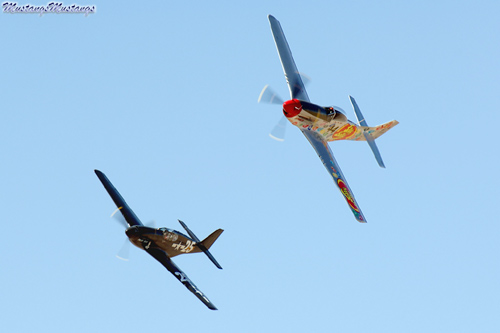 The Bronze class actually gets to almost wings level down the "valley of speed" between pylons 6 and 7. The faster Gold racers will rarely if ever see their wings level with speeds topping the Bronze by about 100 mph. The Unlimited Bronze racers start their racing on Thursday Heat 1B Bronze with 7 racers, qualifiers #14-20. The top 1 (sometimes 2) move up to Silver for Friday and the field is increased to 8 with the top finisher(s) from Thursday Medallion Heat 1C. After Friday's heats, the Saturday Bronze heat adds 3 from Thursday's Medallion and 2 more are moved up to Silver, adding a net one more racer for Saturday. Confused?

It gets harder to follow if there are any DNSs. Leeward took second in Friday's Bronze heat and was paired for the Saturday Silver in last. He did not race Saturday, so the next fastest in Bronze (Rob Patterson in Lady Jo) moved up to Silver and Leeward moved to last in Sunday's Bronze. #9 Cloud Dancer has been at Reno with owner/pilot Jimmy Leeward for many, many years.

Anyways, on Thursday and Friday there are 7 racers in each heat, Saturday 8 racers and Sunday 9 racers. With a full field of 27 (but not this year) there are always racers sitting out, except on Sunday when everyone flies. Bronze heat speeds are usually in the mid 300's with some exceptions. Thursday's heat produced speeds in the upper 300's as Ike Enns in Miracle Maker wins easy at 382 mph. Next racer back in Ole Yeller is John Bagely at 374. They move up to Silver on Friday, and the rest of the field stays put. The top two finishers from Thursday's Medallion will move up to Bronze for Friday.

Thursday's heat showed us some great racing from Bill Eberhardt and Michael Brown. Even though they were in the middle of the pack they put on a show. I sure that Bill's mirror was filled up with that dark F7F. Brown was on Merlin's Magics' tail for a few laps in the middle. Eberhardt was able to hold off Brown to finish 3rd at 361.428 mph. Brown finished 4th at 361.074 mph.

Friday's heat winner was Bill Eberhardt in Merlin's Magic at 373 mph. Jimmy Leeward in Cloud Dancer was cruising a few paces behind at 370. Both Leeward and Eberhardt will move up to Silver for Saturday. The Tigercat of Michael Brown had problems in lap two and pulled out. Also pulling out was Dave Morss in Polar Bear with a gear light coming on. Morss did not finish (DNF) the start lap. During this heat, #9 Jimmy Leeward snuggled up to Bill Eberhardt for a few laps but finished 2nd about 3 seconds behind Bill in Merlin's Magic. Other than that, the field was spread out. Bronze winner on Friday can get to the Sunday Gold by winning the Silver on Saturday.

On Saturday Leeward is not flying (not sure why but I got my guesses) so Rob Patterson takes his spot in the Silver. That leaves Art Vance on the pole in his P-51D Speedball Alice with Brant Seghetti and Michael Brown the next two on his right coming down the chute. The big black Tigercat Big Bossman, took over the race and finished ahead of all others in 8 minutes 9.825 seconds and 370 mph. That big twin sounds real nice coming by the pylons. You should hear the shutters blazing from all the photogs when he approaches.

The only close racing was from Seghetti and McKinstry. Jelly Belly versus the Yak 3. They flew close for a bit as Brandt Seghetti in Sparky (Jelly Belly sponsored) outstretched McKinstry in Shiska Suka by 1.6 mph race average. The rest of the field spread out. The time between 1st and 2nd was over 33 seconds. Bringing up the rear was the only Wildcat out there. Flown by Thomas Camp of Sausalito, Ca, Camp rounded the pylons at 262.24 mph. Joseph Thibodeau in the P-51D Crusader was slated to race but did not start.

Sunday's Bronze Final had Dave Morss in Polar Bear (P-51A) on the pole. Morss finished 3rd on Saturday, but the top two moved up to Silver. Behind Polar Bear is Sparky, Shiska Suka, Wildcat, Cloud Dancer and Crusader. Crusader did not race Sunday either. Well, the fastest racer is Jimmy Leeward starting in last. He will have to pass everyone to win Bronze.

He starts passing everyone but Polar Bear. Leeward just flies some race formation for a few laps (looks like he was having fun). On the last lap, Leeward has had enough of the olive drab P-51A and passes with ease for the checkered flag. Other than Polar Bear and Cloud Dancer, the only close stuff was between Seghetti and McKinstry as they finish less than 1 mph apart. Brant Seghetti in Sparky crossed the line ahead of the Yak at 330.5 mph.

With broken engines and other problems from racers during the week the Bronze Final is short of a full field by four racers! They flew with only 5 aircraft able to make it.