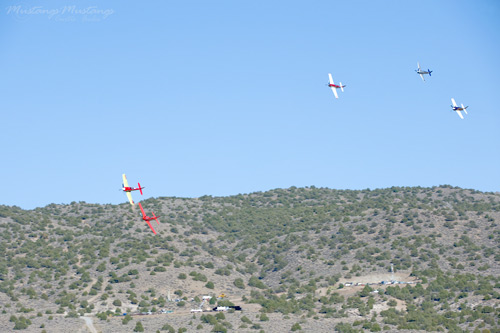 Not just the Unlimited Gold, but the fastest unlimited gold racers in many years are all here at the same time. They are all healthy. The teams and pilots are ready to race. Are you ready? This is one great week of air racing!

Did you know that you would have to go way back to 1986 to not find one of these top air racers in the winner's circle? That's right, since 1987 Dago Red, Strega, Rare Bear or September Fury have been the only unlimited winners! There's a very high probability that one of them will do it again. They all qualified as the top four.

Rare Bear was racing the clock, not just the stop watch on the course but the real clock. They were battling time to get that winning racer back online and in the air before qualifying was over on Wednesday. On their first flight of 2008, John Penney took off, checked out the racer and headed down onto the course to qualify. Penney qualified good enough to hold 4th place, which will give the team until Friday to get more work done.

The three other teams were all rolling along very nicely. All three performed engine runs each day, checking and re-checking screens and plugs. Team Dago Red and Team Strega both liked the morning runs and flights, while the September Fury Team lit up the ramp with some impressive night runs. They were all very confident in their chances to win. All that is left to do is prove it.

The top five qualifiers don't have to race until Friday. We are not expecting too much from the top four, maybe one of them will switch places with the other, but nothing too fast. They would have to save the real racing for Sunday, right? All four pilots, Dan Martin, Mike Brown, Tiger Destefani and John Penney are all competitors and do not like to lose.

Coming down the chute, Martin has pole, then Brown, Tiger and Penney. The rest of the field will not compete with these guys, so I will apologize now for not mentioning them very much. I'm at Pylon 5 with Nikon in hand, watching and shooting, shooting and watching, what a great start. Here they come around four, Martin has Brown at his 4 o'clock and close, a bit behind is Tiger up high and then Penney. Off Penney's right wing is Smoot in Czech Mate. What a site to behold! They are coming fast - around 470ish.

Then Race #4, Dago Red, has a problem. The racer is shaking and Dan has to pull back power to sort out the problem. Telemetry and engine instruments inside the cockpit are all in the green. It is not an engine problem. The rudder feedback tells Dan that it's a problem with the rudder trim tab. This is a problem with the P-51s that comes up in air racing. Martin is going to fight through it, but now he has been passed by Brown and by Penney. Tiger is very close off Martin's wing.

Martin powers back up and keeps Tiger in 4th. One lap later Dan reels in Penney and passes him to retake 2nd place. Brown is running strong and is in front by a healthy margin. Dan pushes on, the merlin is singing like never before. All of the top four are still close then Tiger powers back for the last couple laps - he has seen what he wanted to for one day and takes fourth.


Great race! But, Penney is having a gear problem and can only get one leg of the Bear to come down! Fuel and ADI are both low. Penney is joined by pace pilot Steve Hinton in the T-33 and they work on the problem. If they cannot get both mains either up or down, the possibility of a bail out comes into play. Several tense minutes pass by, no change. Finally, they get all legs down and locked. Penney comes in and lands on 14 safely. Nice work everyone.

The Dago Red and Rare Bear pits are alive and active on Friday night. The shaking of the tail of Dago Red when the trim tab broke has jarred loose some of the bondo that kept this slick racer slick. They have to fix the rudder problem and the cracked and broken bondo joints. Dago's rudder is too far gone to fix quickly. They need another rudder. Dan calls friend Ted Contri who has 2 P-51s in the Carson Nv area. He is a really nice man and lets Dan use one of his rudders to finish the races. Meanwhile, the Rare Bear team is filing and triming away in the gear wells of the Bearcat to make sure the gear problem is in the past.

Saturday is shaping up for another good race. But, how much racing will go on? I asked Dan about his 2nd place position before the race and he was content but would love to get the pole back if possible. He added that 1,2 or 3 going into Sunday would give him a chance to win. Hmmm, I'm thinking we might not see that much racing, maybe Tiger will challenge Penney for third, but Dan will probably stay in 2nd and try to hold off Penney and Tiger.

Well, let's race and find out. Coming hard down the Chute, Brown pulls on the field and gets a good lead by pylon 4. Martin is in 2nd with Penney and Tiger close behind. Lap 2 at Pylon 4 and Brown has increased his lead a bit, Tiger is very close to Penney and high. Brown is flying a wide and low line down the valley of speed. He is coming right by us (we were on the fenceline for this race). Martin is running a tighter line and is cutting into Brown's lead a bit each lap. Tiger is sizing up Penney and will pass him very soon.

Tiger is also sizing up Martin and Brown, watching their lines and taking notes. Last lap, Brown is still in the lead, Martin closing in, Tiger and then Penney. Coming around pylon 6, Martin keeps tight and pushes down hill for more speed. He has enough I think. They are comin' right by me during the pass! Martin gets safely by Brown and into pylon 7 and holds him off till the checkered flag. Woohoo! What a race!

Everyone pulls up to cool down, but Martin keeps going. He must be having too much fun! Actually, he could not hear well, because the canopy kept sliding open during the race and even a small opening at 470 mph can be very noisy. Martin is looking good (racing all by himself) and he pulls up just around pylon 6 to cool off the Sparrow merlin.


Sunday, final day, Gold Final. What a day it is. Perfect weather, fast racers, life is good. Watching the Saturday race out at the fenceline, I was able to notice Tiger hanging back with a great view of the other guys. I thought after race that he might have more room in front of the black handle on the left than the other guys did. I knew Martin had some more, but not how much and would it be enough to hold off three past champs? All top racers are in good shape and the crowd is eager for a close exciting finsih to an awesome week of racing.

Coming down the Chute, Brown's Sea Fury always gets a jump on the P-51s and he does again, but Martin holds him off and keeps the inside line. Rounding pylon 8 Tiger has passed Brown just like Martin did yesterday (he was watchin'). Tiger sets aim on Dago and Dan is smashing the throttle by now trying to hold him off. Martin has about a half a pylon lead coming across home pylon. Past 1,2,3 and then Tiger comes up an over Martin for the pass. Tiger likes the high line and uses it often. Strega is running great and creating good boost. Martin is also running very good, but not as fast as Tiger. Passing home pylon Tiger is a half a pylon ahead of Dago now. Brown is third racing close to Penney. The rest of the field is out there somewhere, but not contesting the top four.

Then trouble, smoke then Rare Bear is a mayday. Penney pulls off the course passing pylon 2 and sets up for a mayday landing on 14. Penney is a pro and he handles it and gets down safely. The race continues, Tiger, Martin, Brown, 1st 2nd and 3rd. Brown is close to Martin, but Martin keeps him away. That's the last of the excitement for this race. They stay in place and the race is done. Tiger does it again!

What a way to retire from air racing. Bill "Tiger" Destefani wins the Gold at the 2008 Reno Championship Air Races. This is his 7th win! The last was a long time ago in 1997. What a fantastic job Team Strega and Team Dago Red have done to get the inlines back on top. Last year the round engine fans were digging the graves and engraving the headstones of the merlin racers - not so fast! The inlines are back and they want more.


Next year? I'm still worked up over 2008. What a great week! Fantastic racing! Let's do it again next September, Ok?