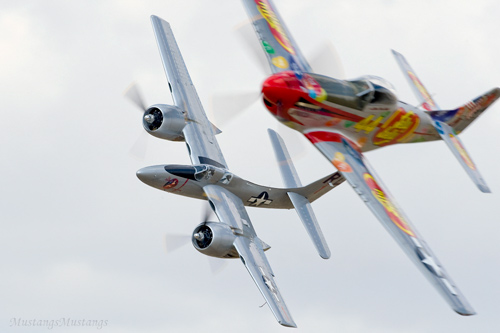 The 2011 Unlimited Racers
story and photos by Curtis Fowles

The Furias Crew has been working hard to just be ready for Reno this year. But they are not content with parading around the sticks. They are here to upset some P-51s. Furias is powered by a Pratt & Whitney R-4360 - that is 28 cylinders of huge horse-power. What a beast! On brute power alone, Furias wins ... but you have to cross the finish with checkered flag flying on Sunday to be the winner. Furias posted a 462 mph qualifying time. That is good enough for 5th and a bye until Friday.

The other unknown was here last year, but we never got see her let loose. That is The Galloping Ghost flown by Jimmy Leeward. The Ghost never had to wind it up last year until the final, but the final was canceled due to high winds. Jimmy Leeward comes into the week very confident. He says he has a few cards to show us and will let us see the Ghost's potential this year. He qualified 4th at 465 mph but many feel that speed is just a teaser - enough to hold on until Friday.

What about Steve Hinton Jr. busting out a 499 mph qualifying run! Wow, Steve is here to win and win big. Team Strega is well aware of the competition out there this year and they do not want to be catching up to anyone during the week. They are out front and want to stay out front. Steve is an awesome young man with top flying skills. He is very approachable even though he wrenches on Strega and is very popular with the media. You cannot help but to be a Hinton fan.

Will Whiteside in #5 Voodoo is right behind #7 Strega. Whiteside posted 485 and change. Voodoo's owner, Bob Button, has endured many years of heart-breaking air racing. He is ready and wants a win. His sleek purple racer is the fastest it has ever been. The addition of Bill Kerchenfaut as crew chief a few years back has brought Voodoo to top speeds. Can they catch Strega? Better question is, can they pass Strega?

Rod Lewis owns many warbirds, including #7 Rare Bear. He had his team working on the Bear early this year and for the first time in recent memory, the Rare Bear team was flying well before September. In years past, the Bear has flown just before the races or even one year, the first flight in a year was during qualifying. This year is different, they are ready and qualified third place at 479 mph. Stewart Dawson took over pilot duties this year while his friend and past champion John Penney stays close by.

Dreadnought is back this year with a healthy round engine. They posted 443, but will certainly move up to the Buick's normal of 454, every day, every year. Sawbones wants to be in the Gold, but their qualifying speed of 423 might not be good enough to stay there. Will Whiteside in his Yak "Steadfast", posted their fastest time ever surpassing the 400 mph mark. Congrats to Will. John-Paul Curtis brought his newly restored P-51C "Boise Bee" to Reno this year. They are fast for a stocker, turning the course at 375 mph just ahead of Brant Seghetti in Sparky.

A special treat for us this year, Bob Odegaard has finished another racing legend. This year #74 Super Corsair is back from the Cleveland Air Racing era. This classic also has the R-4360 massive round engine which also runs seven (yes 7) dual-magnetos. Outstanding work Bob and thank you!

If you like to get up early, or have to get up early, you were able to see some spectacular lineups on the ramp at 6am. Thursday was Cleveland Era day with #74 Super Corsair and #177 The Galloping Ghost sitting out for photos. On Friday #39 Precious Metal P-51R and #1 La Patrona Tigercat. You might have to patient dodging all those yellow-vested media types - ugh - they are everywhere. Even us media have to dodge ourselves as they limit the number of vests checked out and many times they are all gone :(

There was plenty of talk about this year being the year when more than one Unlimited breaks the 500 mph mark for a full race. So far, that was only done by Dago Red. With Whiteside in Voodoo pushing Strega every day, and a healthy Rare Bear and a Ghost coming out of nowhere, there was a good chance for that to happen.

Thursday
No problems for the Medallion race in the morning. We had Jim McKinstry in his red/white Yak, the Wildcat, the FW-190 What da Focke, Polar Bear P-51A, and Doug Mathews' beautiful Corsair. Nice lineup. During the 1st lap of the Bronze in the early afternoon, Steve Hinton flying the pace plane called smoke from Rod Lewis' Tigercat. Seems that the oil filler cap was loose! Good thing Hinton spotted that before Rod saw it on the gauge which could have been too late to save the engine. He landed safely and the Tigercat was back in action on Friday. A surprise was Boise Bee. The Bee was moving fast and looking good around the course. Also in the Bronze, was Sparky, The Rebel, P-40 Sneak Attack, Lady Jo and Speedball Alice.

The Silver race was last of the day and had Sawbones, Miss America, Argonaut, Steadfast, Merlin's Magic, #74 Super Corsair and Precious Metal. Sawbones took first moving him up to Gold on Friday.


Friday
Clouds came in on the west side of Stead, giving us a grayish background at pylon 8. That's how you get 50 photogs to cry out in the desert. But the Bronze race was cool to watch as what appeared to be Dan Martin flying #44 Sparky being shadowed by Rod Lewis in the Tigercat. Finishing the field was P-40 Sneak Attack and P-51s Lady Jo and Speedball Alice.

Early afternoon is time for the Silver Unlimited Heat. Miss America has the pole with Argonaut, #74 Super Corsair, Merlin's Magic, Precious Metal, Boise Bee. Lap 3 was my lap to catch Precious Metal rounding pylon 2, but I did not find him. Looking overhead I see him setting up on downwind for 26. Thorn called a precautionary mayday because of high engine temps. He handled it well and landed safely. Odegaard did not come to turn parade laps. He pushed his way through the heat and on the last lap came side by side with the Green Hornet in Argonaut. Not sure (race results are not up) who was ahead at the home pylon, but Argonaut did have the inside line. Bob is here to race!

The last race of the day. Time to show some speed for the fastest of the fast unlimiteds. Strega does not want to loose top seed, Voodoo wants top seed. Jimmy Leeward in The Galloping Ghost will show some of his cards this race and Stu Dawson flying Rare Bear is trying to get full power out of the Bear. Rumblings were that the Bear was not producing full power. Not sure if that is posturing or real. Coming down the chute, Hinton in Strega puts the throttle forward gesturing "come get me". Voodoo tries to keep pace but that is tough, Strega is smooth and fast. Voodoo keeps second tied up but lags behind the leader by four seconds at the end of lap 2. Leeward sets out to catch Dawson in Rare Bear. Leeward is gaining just a bit in the first lap but really begins to catch Rare Bear in lap 2 and passes him with plenty of speed before crossing the stripe. Leeward is now closing the gap on Voodoo. The Ghost is wound up and Leeward is showing that it can go 500 mph around Stead. What an amazing site. Three P-51s lead the way and all are very fast.

Voodoo maintains about a four second gap behind Strega, but Leeward is coming hard and fast for Voodoo down the valley of speed. Just as fast as the excitement builds for a showdown between The Galloping Ghost, Voodoo and Strega, Leewards hits some rough air around pylon 8, then pitches up and out of the race. We will never know what could have been. It was exciting to watch Leeward chase his dream to be the best. The race was red flagged immediately and all racers except Jimmy Leeward came home safe. No more racing this year. In all our sorrow from losing a friend, we do look forward to those sounds and sights of full-powered unlimited warbirds rounding the sticks at Stead Field, Reno Nevada.