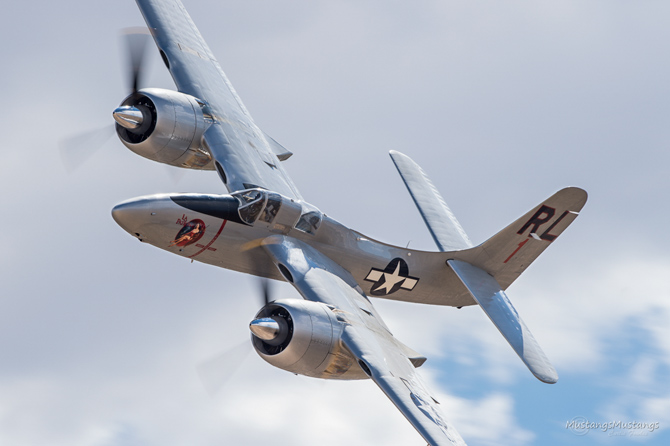 Numbers are again low this year with only 14 contenders, but the top guns are back with some fast speeds in store. This year we have several types including P-51 Mustangs, F8F Bearcat, Yak 11, Sea Furies, F7F Tigercat, Griffon P-51 Mustang and an F4U Corsair all flying on the Unlimited course of 8 miles.

Qualifying was exciting as Hoot Gibson drops onto the course in the #232 Sea Fury of Rod Lewis. Gibson is looking good, adding power each lap until bang - the radial blows up and Hoot is headed for yet another mayday. Like always he handles it like a pro and sets down safely on runway 14. 232 is out - #bawling.

Tiger shows up in his Champion #7 Strega, but he does not have a race motor. He qualifies ahead of the other stockers because of the clean, modified airframe. Rumors are flying that a race Merlin is in transit from Texas. It does show up from Rick Shanholzer's shop and they swap motors and get ready for Thursday.

Thom Richard in Precious Metal had trouble on Tuesday during qualifying and pulls up off the course and declares a mayday. He is coming down STEEP and fast turning to make runway 14. He makes the runway but is carrying a lot of speed. Thom lands 2/3 down 14 and gets her slowed down in time - nice job. #38 has oil down the side as it is towed back to the pits. Word is a blown oil line, not engine - they will race! They get her going again later that evening, but carb problems arise and she is not running smooth. Precious Metal fails to post a qualifying time and will start Thursday in the back of the pack. They have a carb shipped in asap to get ready for Thursday.

Thom Richard wins the Bronze race on Thursday at 359 mph, just cruising, following are Brant Seghetti in #44 Sparky, John Currenti in #12 The Rebel and Jim Tobul in #9 Korean War Hero.

The Silver race has Tiger in with his new race Merlin. Time to see what he has under the hood. Tiger wins the race easily over Curt Brown in Sawbones, but wait ... Tiger cuts Pylon 4 and is penalized 12 seconds - Sawbones takes 1st, Tiger 2nd, then Brian Sanders in #924, Mark Watt in Argonaut and Stewart Dawson in La Patrona.

Tiger has to race in Silver, Sawbones bumped up to Gold. Tiger wins the heat at 462 mph, Precious Metal is 2nd at 423, then Mark Watt in Argonaut, Korey Wells in 924, Brant Seghetti, Jim Tobul, John Currenti and Stewart Dawson returned after take off in the Tigercat with a bad indicator light.

Silver: Thom Richard wins at 437 mph moving him up to Gold for the Sunday Final, 2nd was Korey Wells in Argonaut, Brian Sanders in 924 is third, then Dawson in the Tigercat, John Currenti, Jim Tobul and Brant Seghetti returned with a coolant leak at the header tank and DNS