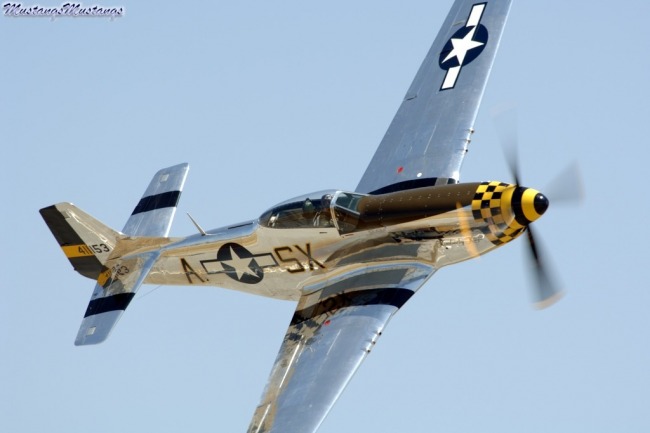 2002: April, Aircraft disassembled and sent to Dave Teeters in Salinas to be finished. First Flight scheduled for late 2002. Current plans are for a polished aircraft with WWII markings.
2002: December, Awaiting FAA paperwork
2003: March, after much work with the FAA N451TB is ready to legally fly.
2003: Mar 22, First flight by Dan Martin.

Dave Teeters has done a fantastic job with this restoration. Everyone was pleased at the end of the day.
With the sun trying to fight through the overcast, Dan Martin climb aboard N451TB and pleased the small crowd of pilots, mechanics, friends of Tony Banta, a few airport bums, and took to the skies with the grace of a seasoned mustang pilot.

Dave Teeters, owner of Airmotive Specialties Inc. in Salinas Ca, was focused and busy as he and his crew checked and double checked a gear swing Saturday morning. Dan Martin showed up as they were finishing and did a quick walk around and liked what he saw. "The Mustang is beautiful" says Dan as he climbs into his flight suit.

Tony Banta was enjoying the day and asked Dan what he thought. His response was "if she runs ... she'll fly" as he smiles and continues his walk around. Tony's P-40 was in the hangar receiving maintenance - another nice warbird and fitting backdrop. Dave carefully lowers the P-51 off the jacks and tows it outside where he gets in and begins an engine run-up before the flight. Then Dan talks to Dave and does a run-up and taxi test. He comes back, they put on the last piece of cowling, gives Dan his parachute and helmet and off he goes.

The weather was not the greatest, a lot of gray skies with only a few patches of blue poking through now and then. But it was good enough to fly. This long-awaited event has been delayed by the FAA paperwork fun known (all to well) by warbird restorers and owners. Simon Brown, who had been involved with many P-51 restorations, just shakes his head and says "well, it's done".

After Dan performed a nice landing, with a slight crosswind, he rolled to the end of the active and taxied back in front of the large WWII era hangar. He gave Dave a report of temps, handling, speed and gear action. In the end, Dan did a great job flying, Dave did a great job restoring and Tony Banta was very happy to see his P-51 flying.