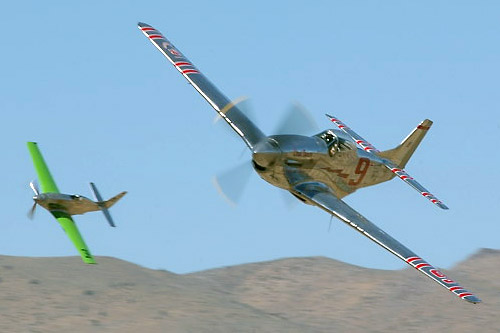 The P-51R is not a true variant or even an official designation, but if you were to ask a typical non-historian type motorhead in September, what the P-51 Mustang was designed for, he would straighten his cap, put down his beer, look at you sideways and say "air racin' of course."

Take history out of the equation and that answer fits very well. In fact, use some creative thinking and it is very easy to see that North American Aviation wanted to build the fastest racer. The perfect ploy - build the world's fastest air racer and get the government to pay you for it. Stick with me on this one...

The P-51 was designed to go fast - race. A very sleek airframe, newest in wing designs, simplistic in construction, easy to modify, built in large quanitites and supplied with enough horsepower and plenty of spares to last for years. The innovative wing design had racing blood from the start. There is a convienent construction break in the wing for easy wing clipping once the pilot was proficient. The stock airlerons were designed with three hinge points, leaving two for the shorter racing version. The wing was innovative at the time with a less turbulent laminar airflow design. That equals less drag, which equals more speed.

The low-drag fuselage with a small frontal area is ideal for racing. Even the most obvious drag on the airframe, really is not. The belly scoop houses the oil cooler and engine coolant radiator to keep the temperatures under control. Air enters the scoop and is misted with water/glycol mix for added cooling. The air is heated as it passes through and pulls heat from the radiator. This hot air escapes out the back of the "doghouse" at a rate that is higher than when it entered the scoop, thereby actually adding a propulsion effect large enough to cancel out the frontal drag. The scoop was designed to be easily extended with a smaller frontal area and yet large enough inside to house the racing spray bar setup. The exit door can be enlarged as needed to keep the hottest Merlins at the top of the green.

The Mustang has a strong airframe built to withstand the rigors of high-G turns close to the ground. The complete aircraft, fuselage and wings, sans the stress doors under the wings and the rudder, is covered in flush riveted aluminum alloy skins ready for fast race paint or polishing. Many racers would easily countersink the stress door screws for another couple miles per hour. Fairings are used where horizontal and vertical surfaces meet the fuselage to keep the airflow smooth and turbulent free. Finally, all three gear wells close up very nicely with tight fitting doors cutting out more drag. Brilliant racing design.

Handling qualities are superb, so the pilot is always in control. Visibility is excellent in all directions except right beneath the nose, but nobody is supposed to be there anyhow. The earlier "razorback" racers were a bit faster but it was hard for the pilots to see that racer behind them. The D model racer was designed to solve this with a new bubble canopy. The canopy is easily interchangable with a race friendly low-drag version.

The P-51 landing gear was designed with gusty afternoon crosswinds and clipped wings in mind. The gear has a wide track which is perfect to control the aircraft once on the ground. One of the best NAA designs was that fuselage ADI tank behind the pilot. That Edgar Schmued guy was a genius.

The engine is very simple, a supercharged V-12 with mega-mod potential. The stocker would get a rookie familiar with air racing, but more horsepower would be needed very soon. Remember that most air racing is low where the air is thick and heavy. A stock P-51 could get nearly 440 mph at altitude, but would be slowed down near sea level. Plus the fact that you are in a turn for 90% of the race course, adds up to the need for more ponies up front. A competent engine guy familiar with the Rolls-Royce/Packard Merlin could more than double the stock horsepower. Several versions of the Merlin with differing supercharger ratios for high or low altitude racing were built.

Even the long-range capability of the P-51 Mustang was designed for those long and grueling cross-country Bendix Races many times won by a P-51.

It has been speculated that even though, this champion air racer was used in a war, it was designed and built with air racing in mind. NAA then added some armor plating around the pilot, added a gun sight, put a few guns in the wings and turned the fuselage ADI tank into a fuel tank. The Brittish bought the idea and then NAA back-doored it the US Army. Ingenius. To show you how far ahead NAA was in their time, they even put a camera in the wing for great race footage and every P-51 came with a unique race number on the tail.

Fact or fiction? You decide, but no matter what you believe about the conception of this historic racer, the proof is in the record books. Shortly after the war, many P-51s (as planned ;) ) became surplus and in the hands of awaiting air race pilots. In 1946, a clipped-wing Mustang, owned by Earl Ortman, raced in the Thompson Trophy Race taking third. Believe it or not, but NAA was into air racing. In 1946, NAA technicians worked on P-51D NX33685 right outside the NAA plant in Inglewood, Ca just before the Thompson Trophy Race.

Air racing continued post-war in Cleveland and other venues. Pylon racing and long distance racing as well. The aircraft were set up quite differently. The long range races were best flown at altitude, where the P-51 shined. The pylon races were down low and Merlins with a different type of supercharger were better suited. With each race, new mods were tried to get the most speed out of the P-51.

In 1950, it was decided for various reasons that no more ex-military aircraft could be used for air racing. Gone were the Thompson, Sohio, Bendix and Tinnerman Races. Reasons cited were a diminishing number of ex-military aircraft available and the tragic crash of Bill Odom's highly modified P-51 racer Beguine.

Somehow, these civilian warbirds were kept from organized racing until the early 60's! In 1964, the modern air racing era was born. Pylon racing returned, but not in Cleveland. The races were held at Sky Ranch airport just east of Reno, Nevada. In 1965, more venues were added like Lancaster, Ca and Las Vegas, Nv. Later in 1970, races appeared in Mojave, Ca and some in Florida, even Colorado. Long range and pylon racing were enjoyed. Many other venues have been tried (some as recently at 2004), but the one that has stuck is of course, the National Championchip Air Races at Stead Field in Reno, Nevada.

Each September, racers of all types come to Reno for pylon air racing in the desert. The P-51 Mustangs have performed very well and hold the race speed record - Dago Red 2005. Today, both stock P-51s and full race-cut custom P-51s enjoy this sport.

There have been, and still are, highly modified designs that try to better or radically improve the design of the P-51 Mustang. Several P-51 based highly modified racers have been built. The results are mixed. These are radical designs that incorporate little P-51 parts. The engines are Rolls Royce Griffon engines, which are much larger and require a completely different engine mount system and components with two contra-rotating props. Some of these racers have use Learjet wings custom tailplanes. There have been very violent and serious crashes of some of these racers, some taking the life of the pilot. One, "Precious Metal" is still flying today.

Only one of those racers, the Red Baron, has been able to surpass the speed obtained by modifying stock P-51s. Red Baron did reach record breaking speeds. But the fastest race ever flown is held by Dago Red, a modified P-51D. There certainly are modifications to the body, the lines and of course the engine, but it retains the look and structure of a P-51. The race crew has worked on every part of the aircraft that could reduce drag or increase horsepower. The result is a racer that averaged over 500 mph for an entire race! Remember, that's not straight and level, but an 8 mile pylon course - wow!

Does that mean that only the highest modded aircraft can race? No. Stockers and lightly modified P-51s come from around the country each year for the fun and challenge of air racing. Stock P-51s can run safely in the low to mid 300 mph why a moderate modified P-51 will reach 400 mph with a good engine. Stock P-51D airframes with bolt on modifications, clipped wings and full race Merlin engines have put up speeds in the 460's mph.

In 1946, as the first civilian P-51 rounded the pylons in Cleveland, can you imagine the look on the face of the pilots if you told them that 60 years later, the P-51 Mustang would still be racing, and still be winning.