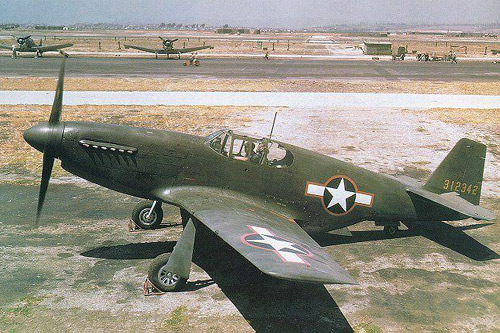 Now, the P-51 really comes to life. With successful retrofits of a Merlin engine into a P-51 from both sides of the Atlantic, orders were place for the new Mustangs, NA-102, NA-103, NA-104, the P-51B and P-51C. These retrofits first flew in October (RAF) and November (USAAF) of 1942. Orders for 400 P-51B-1NA had already been placed months before the successful test flights.

The engine would be the Packard built Rolls Royce Merlin 61, V-1650-3 which was rated more than 490 HP more than the Allison V-1710 at 25,000 feet! Other mods included in the P-51B were increased loads to 1,000 lbs under each wing, no more nose mounted guns (no room with the Merlin) and a redesigned belly scoop. There were many other changes firewall forward to accomadate the new engine. The Merlin used an updraft induction system, so the intake was moved below the spinner and an intake trunk installed behind the cowlings.

The cooling system was key to the health of the merlin. The front of the new design scoop was angled towards the back (from top to bottom). The scoop was lowered a bit more to get out of boundary layer turbulent air under the wing. Behind the scoop, the ducting was enlarged to fit separate locations of the coolant and oil coolers. The oil cooler was repositioned in front and slightly lower than the main radiator and given its own exit door. The main radiator door was enlarged and redesigned.

The exit doors controlled the amount of airflow exiting the ducting thus controlling the amount of airflow entering the scoop and flowing over the coolers. Settings in the cockpit could be set automatic or controlled manually if needed. The P-51 was designed to be easy to fly for the pilot so he could concentrate on other stuff like the bad guys. Alternate filtered air intakes were added on each side of the chin scoop. These were for use in dusty conditions only as it cut the intake airflow down a bit.

Now NAA was really cooking. They had the hotest fighter in existence and orders piling up at the hangar door. Could they keep up production with the orders? The USAAF did not think they could as equiped, so they instructed NAA to expand their Dallas plant to start a new line for more P-51s. The P-51B model line would be built at the Inglewood plant, and the P-51C line at the Dallas plant.

The first P-51B exited the assembly line and flew in May of 1943. The P-51C model flew 3 months later. In search of even more range, an 85 gallon fuselage tank was installed behind the pilot's seat. This began with the P-51B-7NA (taken from -5 line) and the P-51C-3NT versions (taken from the -1 line). With this added range came a price of directional stability. Fully fueled and loaded, the P-51B and P-51C were a handful in take-off and climb. Pilot's soon learned to burn most of the fuel in the fuselage tank first, then switch to the drop tanks before you had to drop them and fight, then back to any leftovers in the fuselage tank on the way home and finally to the mains in the wings. Read Bob Goebel's book for a great story about how he learned about that.

The -5 block added the alternate air source on each side of the cowling with filtered air and provisions for cold weather operations. A new Merlin -7 model was incorporated into the production line at the end of the P-51B-10NA block. Horsepower was boosted again, up another 50 to 1,450 at take-off. 91 model F-6C-NA or NT were created from -10 block of P-51Bs and the -10 block of P-51Cs. They had cameras mounted in the rear fuselage near the star and bars.

Problems for the P-51B and C models included poor visiblity towards the rear and gun jamming during high G manuevers. The RAF found the best solution (at the time) for the visibility issue was installing a "Malcolm Hood" which was a bubble type canopy around the pilot's area of the birdcage. The new hood was on rails sliding rearward for an easy in and out. The old canopy was hinged and more diffucult for egress.

The gun jamming problem was solved in the D line and a field mod was sent out to fix B and C models in service. The B and C models only had 4 .50 cal guns. This would be increased to six in the D model line.

The first operation unit to recieve the new Mustangs was the 354th Fighter Group appropriately nicknamed "The Pioneer Mustang Group". The B models were on station in October of 1943. Other units started to receive Merlin Mustangs in December '43 and January '44.

The USAAF soon realized that after loosing nearly a third of their bomber force on some missions, that the bombers could not defend themselves against enemy fighters as some had thought. The long-range Mustangs were pushed into service as escorts to the daylight bombing missions. Bomber crews were very happy to see them along side. Six months later, enemy fighters would not be the biggest problem anymore. But, very accurate and deadly enemy flak would be.

The "Razorback" Merlin Mustangs P-51B and P-51C remained in service until the end of the war.