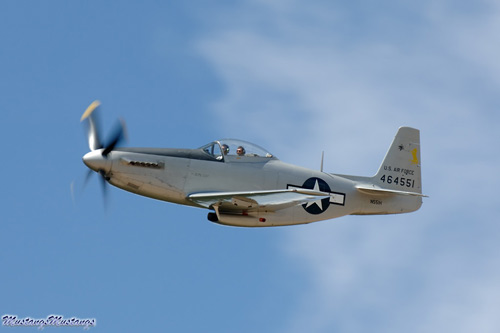 In July of 1943, U.S. Army approved a contract with North American Aviation to design and build a lightweight P-51. Designated NA-105, 5 aircraft were to be built and tested. Edgar Schmued, chief of design at NAA, began this design early in 1943. He, in February of 1943, left the U.S. on a two month trip to England. He was to visit the Supermarine factory and the Rolls Royce factory to work on his lightweight project.

Rolls Royce had designed a new version of the Merlin, the RM.14.SM, which was proposed to increase the manifold pressure to 120 (from 67 max) and thus improve horsepower to 2,200. Schmued was very eager to use this powerplant. The new Merlin was not heavier than the earlier models. Schmued visited with the engineers at Rolls Royce and they answered his many questions. Schmued left the Rolls Royce factory very satisfied with their cooperation.

Brittish fighters were lighter than U.S. fighters. Schmued ask for detailed weight statements from Supermarine on the Spitfire. Schmued wanted to know why the Spitfires were so much lighter than the P-51. Supermairne did not have such data on the Spitfire, so they started weighing all the parts they could get a hold of and made a report for Schmued. The Brittish had design standards that were not as strict in some areas of design as the U.S. Landing gear, angle of attack and side engine design loads were higher in the U.S.

When Schmued returned, they began a new design of the P-51 Mustang that used Brittish design loads. They shaved weight on any part that could yield. They were able to reduce the empty weight of the P-51 by 600 pounds. This would translate into more performance.

The H model was a completely new design. Yes it looks like a P-51, but you can tell there is something not the same. I remember as a teenager when I saw my first P-51H in person. I asked my dad, "that's a Mustang ... isn't it?" as I looked at it and tilted my head slightly. He looked and my uncle looked, and then they paused and decided that yes it was a mustang and it must be the later H model (they were seldom stumped when I asked them aircraft ID questions).

Almost all the parts from the D line were not usable in the P-51H. This was the first production P-51 with a complete overhaul. The wing did not have that famous leading edge kink in it. The landing gear was visibly smaller. The profile shows new lines with a taller tail (later versions). The fuselage was a bit more slender and the length was increased to 33.33 feet. The wingspan stayed the same. The belly scoop inlet profile was not angled any longer but was now square again like the first P-51s. The chin scoop for the engine was decreased in size.

The wheels now had disk brakes. The oil cooler was moved from inside the belly scoop to in front of the oil tank ahead of the firewall. This eliminated the oil lines that ran from the engine to the old location in the scoop. The oil was now cooled by a heat exhanger mounted next to the engine intercooler.

The engine mounts were incorporated into the structural engine cradle, thus saving weight. The engine would not be the newer RS.14.SM Merlin as in some of the lightweight prototypes. The Rolls Royce Merlin V-1650-9 was chosen. Take-off horsepower was actually down from the -7 series to 1,380. But, the new -9 Merlin used water/alcohol injection and was able to up the war emergency power to 2,200 at 10,200 feet. This was the fastest production P-51 clocking 487 mph at 25,000 feet.

The propeller of the P-51H was the Aeroproducts 11'1" 4-blade Unimatic otherwise know as the "H prop". This prop is even lighter than the K model Aeroproducts but it looks much different. The blades are wider and keep approx. the same width almost the whole blade. The tips are rounded.

Armament was the same as in the P-51D. Removable ammo boxes and a redesign of the ammo doors were added. This saved time reloading and must have eased up on the laminar flow killing scratches and scuffs on the wings. The earlier models had to be loaded by hand out of portable ammo boxes. The top surfaces of the wings were taking a huge beating and disrupting the true laminar flow of the wing surface. I honestly doubt the crews in the field either knew or cared much about that.

Fuel in the fuselage tank was decreased to 55 gallons max. The fuselage skins were lighter and thinner, made from a new alloy. The cockpit panel was improved and simplified. The canopy was redesigned and the "hump" moved further forward. The pilot sat higher for a better angle using the gunsight.

Contrary to what many believe, the P-51H did not start out as "the tall tail Mustang". The first 20 P-51H-1NA were built with the lower D model height tail. These units were later retrofitted with the taller tail. The taller tail and smaller fuselage fuel tank of 55 gallons, rid the P-51 of the annoying directional stability problem.

Production was cut short by the end of the war. All P-51H versions were built at Inglewood, Ca. The Dallas, Tx version of the P-51H, NA-129 P-51L with the newest Merlin, the V-1650-11, would not finish any models. The last P-51 off the Texas production line was an NA-124 order which included the newer P-51M which was an improved P-51D-30 with the V-1650-9A Merlin and a Hamilton Standard Prop. The -9A Merlin did not have water injection. One production M model was completed. The 63 partially built units were scrapped.

Even though some units in the pacific received the P-51H before VJ Day, they did not see any action. Ironically, when the start of the the Korea War broke out, the earlier version of the P-51, the P-51D was chosen to do the fighting, not the P-51H. In the years to follow, the H was used in many Air National Guard units around the U.S.

Only 5 P-51Hs survived, 2 are display quality only, 2 are airworthy and the last is in restoration to be airworthy. One of the XP-51G prototypes does exist and is in a long term restoration with John Morgan in California. This G model was saved by chance and fast action while on its way to the scrapper.