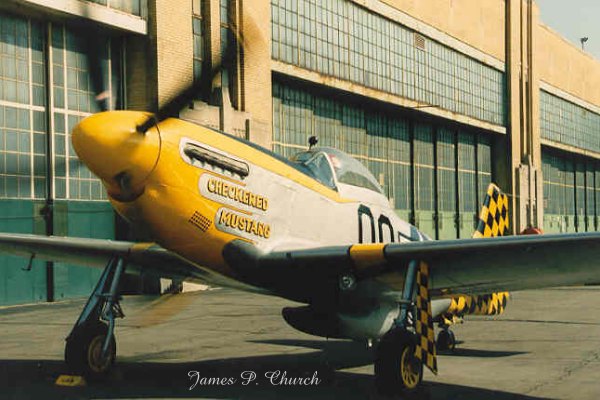 << Case # 158
Who?   Case # 159
Case # 160 >>
P-51 Who? Viewer Responses
David Lindauer
44-72811... A familiar Mustang in a not-so-familiar paint scheme.... Currently she is with Bob Converse as N471R, "Huntress III." Back in 1987 she was "Checkered Mustang" with Bob Byrne. Note the Spitfire mirror and lack of gun ports!
Tim Savage
Isn't this 44-72811 when Bob Byrne owned it, shortly after he bought it from Buck Dear? If it is, it is now Huntress III.
Joseph Scheil
I believe this one is N268BD, which at the time was owned by Bob Byrne and was noteworthy in that it is a skeleton "TF" or TP-51D. IDF/AF 13 was listed as a recovered Mustang from Israel and combined with a movie prop P-51D, a sister to Elmer Ward's aircraft? This mustang was the result. It was said to be constructed as a TF-51D, though I have not seen photos of the rear cockpit and believe that only flight controls are present. It was initially flown as Big Beautiful Doll, then this paint and then to Robert Converse as N471R, "Huntress III". 44-72811 or the uscr 44-26060!
Mark Hrutkay
I can't put a name on it, but I'll bet money Bob Byrne owned it (He had that hangar) and at one time Bob had 3 or 4 Mustangs(Including the current Crazy Horse), a P40 (Burma Rascal), a T28 in there.
Mike Dannels
In case # 159 that is one of the mustangs that Bob Brynes owned in the mid 80's... I think he had 6 at one time and if I'm not mistaken this is N268BD formally owned by Buck Dear before Mr. Brynes bought the airplane... Now I think it's owned by Robert Converse and painted as "Huntress III"... Mr. Brynes gave me my first ride in a mustang back in 1982 in his first P-51D "Rascal"...
Dick Phillips
CHECKERED MUSTANG is 44-72811 Here is its story.
44-72811 was retired from the the 119th FS NJ ANG in May 1955 and sold to Universal Studios, and was later used in the film, BATTLE HYMN. The center section of the fuselage was rescued from the movie backlot in the 1970's and mated to wings and other components from a mustang obtained from Israel by the Regina Brothers. While under restoration, the aircraft was sold to Phillip Dear of Terry, MS who completed the work. It was finished as BIG BEAUTIFUL DOLL and registered as N268BD, for his nickname, "Buck Dear". In 1987, Bob Byrne of Bloomfield. MI bought it and changed the paint to CHECKERED MUSTANG. In 1988, Byrne sold it to Bob Converse of Sisters, OR and it became N471R and repainted as HUNtrESS III.
Paul Maglothin
I know Buck Dear. He is a close personal friend of mine.I spent a lot of time working on this airplane when he owned it. He loved this airplane a lot. He sold it for personal reasons, and cried the day it left. He is in a nursing home now. He has had a stroke, and has difficulty doing anything, but he still remembers his Big Beautiful Doll.
Paul Milazzo
Went for a ride with Bob Converse out of the
Minter Field airport many years ago.
Bob is a great pilot and super guy.
Kaye Riggs
Sadly, Robert Converse, an old friend although I'd lost contact with him for about 10 years prior to his passing, did leave us several years ago, I think 2013.

Robert and I flew together at Apollo Airways/Pacific Coast Airlines out of Santa Barbara back in the early 1980's. Robert went on to PSA/USAirways and I went on to Continental, retiring as a 767 Captain in 2009.

I last saw him at Oshkosh in the mid 1990's. He had the Huntress III there with his "Flying Fortress" set up selling rides and T-shirts/memorabilia. 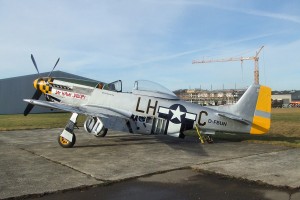