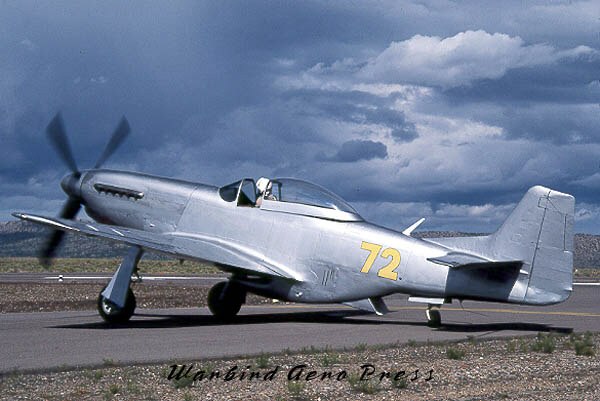 RCAF 1950-60 - N6313T, James Defuria, 1960 - N6356T, (numerous owners*), 1961-79 - N72FT, Bill Destefani, 1979-87, Race 72 "Mangia Pane" - N72FT, Vintage Aircraft Inc, Mountain View CA, 1987- (flies as "411661/Iron Ass") [Hugh Bickle]
*Benjamin Peck, Charles Masefield, Ed Jurist, Wally McDonnell, Bill Destefani
Mark Moodie
Bill Destefani's N6356T ? Mangia Pane, Later became N72FT. Picture taken shortly after Reno 1980.
William Yoak
This is the former Mangia Pane when owned by Bill Destefani and raced by Ron Hevle in 1980 and 1981 at Reno. Destefani raced it himself in '82 after Hevle moved up into Dago Red. The aircraft has been owned by Hugh Bickle for the last several years and is based in Hollister, CA. It has a different WWII paint scheme and is called :"Iron Ass".
Jim Pera
This is Bill Destefani's "Mangia Pane" before it was painted.
Brad Haskin
The subject is N72FT, "Mangia Pane" at the Reno Air Races in 1980 (rookie year). Owned by Bill "Tiger" Destefani and flown by Ron Hevle, this is what she looked like prior to the more common silver, yellow, and black livery she had for the next several years.

This plane also raced in the Kings Cup race in 1967 in England, before coming across "the pond". Currently owned and flown by Hugh Bikle as "Iron Ass".
Libby Jurist Fagen
I am the daughter of Ed Jurist. There are a number of planes we're trying to find-they were alleged to have burnt in a fire but my father did believe they were, there was no evidence of a plane ever having been in the locker that did burn, etc. I have the N numbers, and list of transactions proving that my father did own these warbirds. Anyone with any knowledge should write to me at the email listed above. Thanks, Libby
Elmer Kliewer
In '85, I was fortunate enough to be given a ride in Mangia Pane when Bill Destefani needed to move it from his Shafter hangar to his Bakersfield hangar. Talk about being in the right place at the right time! He even put it through a little aerobatic routine for me. What a ride!
Dale Moody
I have a much better photo than the one shown for previous iteration of Big Beautiful Doll as camo-painted Reg. #6165U, BuNo. 44-63634/44-84634a which I took at Menomonee Falls, WI in 1979. Let me know if you want it and I send it s long as I get photo credit.......Dale
Case Closed! 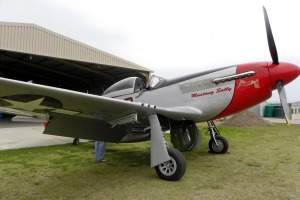