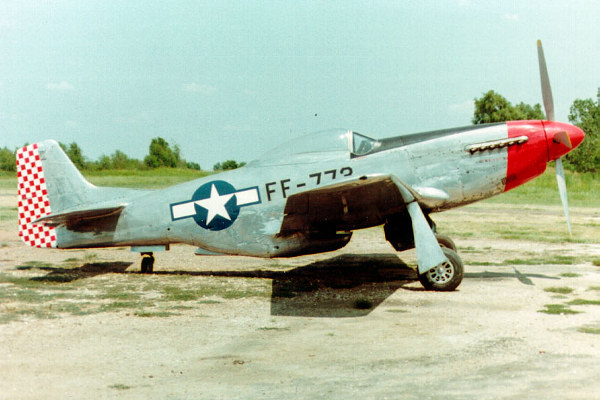 << Case # 30
Who?   Case # 31
Case # 32 >>
P-51 Who? Viewer Responses
MustangsMustangs
Looks like FF-773 on the fuselage. Unknown date and place of photo.
Jim Church
Case 31 shows P-51D-25NA 44-72773, currently registered G-SUSY to Paul Morgan in England. It had been imported into England by the late Charles Church, whose wife's name was Susan, hence the registration. Mr. Church was killed in his newly rebuilt Spitfire Mk.V, EE606, and the Mustang passed on to Morgan. It wore its Memphis Belle movie olive drab and neutral gray paint scheme for many years, but has recently been painted in a silver 4th FG scheme by its owner. it had served in the Texas Air National Guard's 182nd FS, and had carried the US registration N12066 before going to the Nicaraguan Air Force as GN120. It returned to the US and was re-registered N12066 in 1963, and was owned by Bill Martin, of Chicago, Illinois. After his ownership it passed to Junior Burchinall, of Paris, Texas, where I believe it was modified to dual control TP-51 status and used to give Mustang check-outs. It then went to Bob Ferguson of Wellesley, Massachusetts, who was its last US owner before going "across the pond" with Church.
Tom Griffith
I took this photo about 1980, at the Flying Tiger Museum in Paris, TX. It was owned by Junior Burchinall at the time and the going rate for a ride with him was $200. I am glad to see that someone found out where this Mustang is now.
John Ward
Hi....just going thru some old pictures I've taken over the years, and I've found several black-and-whites of FF-773 when it was in Paris, TX, owned by Ike Burchinal. He gave me a ride in the P-51 in 1975 during which I shot several more color shots. I took pictures of several other of his aircraft as well. I had flown my Cherokee-SIX to Paris one morning, and as I entered the pattern, there was (BEHOLD!) a P-51 in the pattern with me. After we landed, I met Ike Burchinal, and BEGGED, even offered to PAY for a ride in the F-773. He GAVE me a ride for FREE...what an experience!!
Let me know...
thanks
john ward
229 South Perkins Rd.
Stillwater, OK
405 624 2274
Oliver Holmes
This aircraft was sold after the death of Paul Moran when his Sea Fury tipped over on landing. It went to the real aeroplane company at, Breighton, Yorkshire, UK. She has been sold again and is now based in Germany.
Richard Cole
Mr Junior Burchinal taught my dad to fly in the late sixties and as little kid I got to crawl up in this mustang.. my cousin got to ride in it.. He also had a b 25, and several other neat planes.. Before the Paris airport Mr Burchinal had a small runway over in Honey Grove Tx.. My dad flew his piper cub from both airstrips..
GREGORY S MICHAEL
i was trained to fly that exact plane back in the late 79 jr first put me in snj because he said it was harder to fly than a t 6 i had already had t6 time at zahns on long island i read a flying magazine article about jr teaching pilots how to fly war birds i made a deal with him for a thousand bucks and I got 5 hrs snj and 10 hrs mustang which cost me another 200.00 for a place to stay back in paris tx junior was a real piece of work
Case Closed! 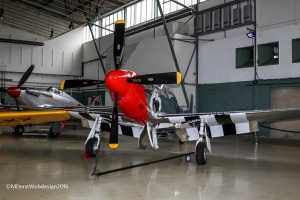