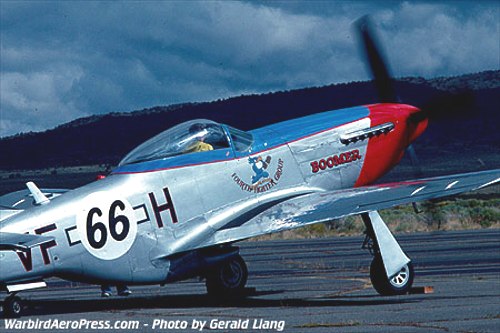 << Case # 324
Who?   Case # 325
Case # 326 >>
P-51 Who? Viewer Responses
William Yoak
This was Max Hoffman's "Boomer" at Reno during the late 70's.
Terry Colberg
While I was a student during the 70's at Colorado State University in Fort Collins, Colorado, I had the pleasure of talking with the owner of "Boomer", Max Hoffman several times as I was learning to fly with the university flying club. Boomer was based at Valley Airpark in Fort Collins and I was able to get an up close and personal look at the aircraft several times. Max was always gracious and willing to share his knowlege of the aircraft with me. Max was a colorful character and enjoyed doing some showing off in his P-51, which caused him to get written up by the governor of Wyoming when Max buzzed the CSU football stadium during a Colorado State/Wyoming football game.
Erik Hoffman
Man I did a search on my Grandpa's P-51 I and found this, its pretty crazy. He also won best of show at Oshkosh In '76 for one of his P-40's. So I figured I should post my response.
Mike Hoffman
Max Hoffman was my father, he unfortunately died in an air crash in 1986. That shot was taken at the 1979 Reno race. That is actually me in the cockpit doing an engine run after changing out a bad magneto.
Fabulous memory for me! Also great to see my son Erik had seen this and posted a thought as well, I love it. Thanks for posting this.

Gary lambert
Thanks for posting, max was a great man! He always took time to explain things he was working on when I would see him with Boomer. Fortunately I have been able to view the rebuilt Boomer a few years back after it was destroyed in s fire, I think max would be proud
Robin Foote
Mike - I remember your Dad well from the Canadian Warplane Heritage days in the late 70's early 80's. He and my Dad, Dick Foote knew each other well as my Dad had a P-51 for many years. I used to fly in the shows with myDad in my T-6 or one of our Tora planes and he flew his Wildcat. I'll never forget sitting in the grass one night at the CWH show along with your Dad and just having a great conversation about how fortunate we were to fly these great airplanes and how much I reminded him of you. He spoke so proudly of you. He was a very great guy -a true "Man's Man" that belied a very sensitive, kind man underneath. Glad to have been able to share this with you. Robin
Steve Gress
I moved to Fort Collins around 1980 or 1981. I new Max's plane was out at the Fort Collins/Loveland airport. I looked him up in the local phone book and asked if I could go and walk around his plane. He was very nice and said that was fine, just don't get on or in the plane. At that time Stump Jumper was parked next to Boomer, and there was a P-40E that I can't remember the N number, but no shark teeth and a drop tank. Later at the same airport the soon to be Aluminum Overcast was parked.
At the downtown airpark, at various times, were a couple of different P-51's, N167F being one of them. That was parked out back of Daryl Skurich's Vintage Aircraft. Now the downtown airpark is gone and you can't even get close to the tarmac at the Fort Collins/Loveland airport. But they were great memories!
Jay Moeller
Mike, memories of ski trips and Boomer at Fort Collins. At one point there was a pic of Boomer hanging in the Smithsonian.

Jay
Cheryl L Hoffman
Wow - I just found this today after running into a friend of my Dad's in Texas. I have a few tears in my eyes. Erik is my nephew, Mike is my brother and Max was my Dad. These memories are amazing. My story was Dad flying me back to Colorado to see an Elton John concert in 1976 - pulling a few Gs and into the sunset over the Rockies. He made me attend a famiy reunion in Kansas, and I thought I was going to miss the concert for family. He made sure I got to do both!! It is a great loss that my children never got to know him or this kind of flying.
Stacy Base
Mike and Cheryl this Stacy your cousin in Kansas. I sure would like to touch base with you guys and see how everyone is doing. Erik if you see this will you please tell your dad to email me? Thank you.
Keith R Forrest
Back in the late 70's I was taking flight lessons from my brother at the Ftc lvd airport which at the time I think the FBO was owned by Max. I spent a lot of time there and got to talk to Max a fair amount. He was a real down to earth guy and easy to talk to. One day I asked what it would take to get a flight in the Boomer just in passing, he replied" Go grab a couple of parachutes out of my office" I don't know how many people get to ride for over an hour of aerobatics in a P-51 but it is a memory I will never forget for as long as I live. When I heard about Max's accident I didn't know how or who to send condolences to but hopefully this will suffice. I remember Mike flying what I remember was a T-34 and seeing him around the airport. I have thought of Max and the Boomer often, Max even gave me a small artist drawing of Boomer that I still treasure. A really great guy, the world could use a lot more like him.
Case Closed! 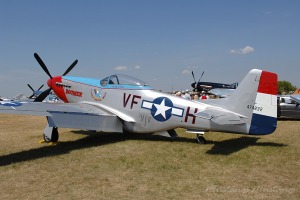