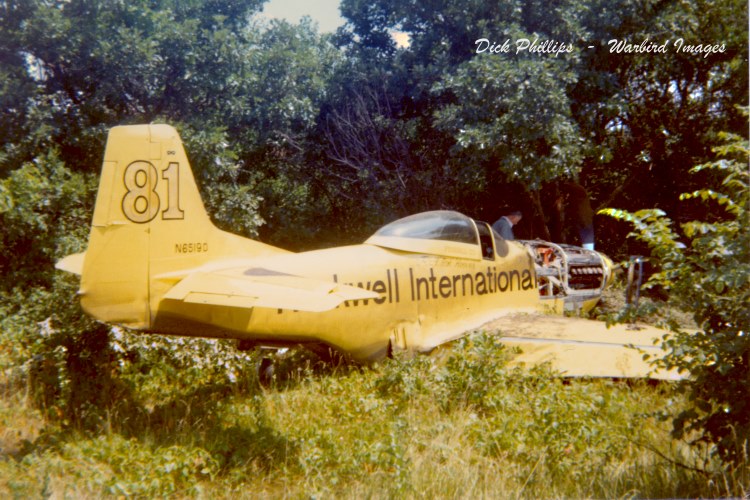 << Case # 329
Who?   Case # 330
Case # 331 >>
P-51 Who? Viewer Responses
Martin / Swiss Mustangs
This is 44-74012 that was delivered on 6 December 1950 to the RCAF as RCAF-9243; it saw service with No. 416 Sqn; sold after retirement in August 1959, it then adopted civil reg. N6519D; carried race #81 from 1968 - suffered emergency landing in 1974 (photo)- rebuild started and re-registered to C-GPSI in October 1976 but never completed; returned to the U.S: and rebuild completed. registered again N6519D in January 1984, I t is airworthy today, flying in 357th FG colors and is owned by James Smith of Kalispell MT. Martin Kyburz / Swiss Mustangs
Brad Haskin
I believe that's "Little Stevie Hinton's" handywork in that picture. The Mustang was restored/built by the late Ralph Payne for Leroy Penhall in 1969 as Race #81. Hinton was flying it for Penhall (at Oshkosh '74, I think) and had a take-off incident.
Ken Pedersen
Rockwell International was the plane flown by R.A.Bob Hoover in airshows. I believe It was wrecked by a ferry pilot between show. Don't know the date.
LCDR Carl McDonald, USN, (Ret.)
Does anyone have a pix of a '51 with a jumpseat behind the pilot - I recall that a few were modified to allow maintenance personnel to ride through demos. CGM
Grant Eaton
This is indeed the -51 flown by R.A."Bob" Hoover. I have a picture of myself sitting at the controls in this aircraft when he was flying it at various shows. My Father, Warren Eaton owned another warbird at the same time and we meet at Oskosh, Wi for the fly-in. He also flew a Rockwell AeroCommander and did acrobatics with it in various shows around the world. I don't know the date of this photo, but it is the same plane. it was the only -51 painted in the yellow with the black rockwell international logo. I will try to post the picture of it with "Bob Hoover" leaning over me at the controls. naturally this is just one of the many warbirds that he got to fly.
Steve Hinton
This picture was taken Aug 5 1974 along Hwy 35 near River Falls Wisc.
Tom Huismann
The airplane is Leroy Penhall's P-51. The airplane experienced an engine failure while Steven Hinton was flying the airplane. My father had flown the airplane the day before from Oshkosh to Eau Claire and return. While flying the airplane he noted that the oil pressure was a little high.
Robert Gollwitzer
Have more info on Jimmy DeSanto's P51K named ConnieIII flown at Cleveland 1948.It had clipprd wings Race #75 & N68183 on the wing. He blew a header tank trying to pull 100 inches. Does anyone know what happened to this plane?
Ken Price
Hello Robert Gollwitzer. I do have additional information related Jimmie Desanto and his P51 #75 "Greater Muskegon Michigan" aka "Connie III". If you are interested in more info, contact me at muskegonriverresearch@yahoo.com
jim marson
Steve Hinton was the pilot. He was 22 at the time. I was 16. He did a remarkable job of landing this plane on a 2-lane highway. Upon impact, he clipped two bridge marker signs. More remarkable, in fate, his left wing clipped about 30+ mailboxes from an ajoining trailer park and sent them flying. Wheels up he depleted speed rotating 160 sliding into the right side of the ditch (easterly). I was present for the recovery and removal of all markings on the aircraft as it was loaded on the flatbed. ENTIRE wing and fuselage side by side. As for all the motorcycles, Only Hinton can tell you that part. I was about one half mile away uphill.
jim marson
Oops- Right wing hit mailboxes as he was heading in a NORTHERLY direction.
Tom Marson
Steve lost engine oil pressure on a late afternoon ferry flight from St Paul Minnesota to Oshkosh. Landed on busy two lane road between lots of traffic "lucky".
My friend Lyle took him to his house to use the phone to call for help.
I was always amazed at how lucky he was to drop in to the two way traffic and get by with it. I also wondered if he could have reached I 94 with better chances of fitting into the traffic. I 94 was about 3.5miles from his actual touchdown in front of the trailerpark.
Mike Marson
My recollection starts with being in our yard and hearing an aircraft engine I'd never heard before with my line of sight blocked by a hill to my east and north. Then the P51 broke clear of the hill blocking my sightline at an altitude of perhaps 400 feet, and was trailing smoke black by the fuse, blue further out.

Then the engine started backfiring, I thought engine trouble, as his flightline traveled westerly. I thought he was going to land on county FF an E-W paved infrequently used 2 lane road. I was surprised when he began a steeply decending left turn with wheels down as I recall.

As my brother and I began running to get a better look at this unusual sight, the plane dropped out of sight behind another hill a half mile to the south and less than a second later we heard an awful crash sound. We continued running to the crash site perhaps an additional half mile further south from where I thought touch down point would be. The P51 was lined up well with the centerline of the RH lane of US Highway 35 running N-S and decending at a 2% grade at the point where the right wing clipped a pair of bridge markers and all the mailboxes on the east side of the highway. The rotation of the plane was nearly instantaneous at his landing speed since the plane rotated into the east ditch perhaps 300 feet beyond the mailboxes and bridge.

When we finally arrived I could see why he did not land the EW county road. The foward part of the canopy was completely covered with oil and his only reasonably clear vision would be out the sides . Upon spotting HWY35 he could maintain a good line of sight with a left turn all the way to touchdown, similar to a Corsair landing approach to a carrier deck.

In the years since, I've come to recognize that the engine backfiring on the rolls royce is common when the engine has been throttled back after running hot and not a sign of engine trouble, so that is the sound I heard as the pilot determined that he was going to make an emergency landing and began his decent.
John A Royer
Great to see this plane back again, worked for Penhall Co 1968 paint work, got ride with Leroy in this plane, practing for racing of Long Beach, ride of my life,me 29 Leroy 38 yrs. I'm from Fullerton Cal. now in Reno since 70 Thanks to Hinton saw him go down hard at Reno Red Baron not much left of that one. John
Case Closed! 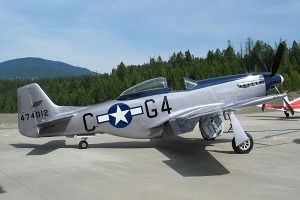