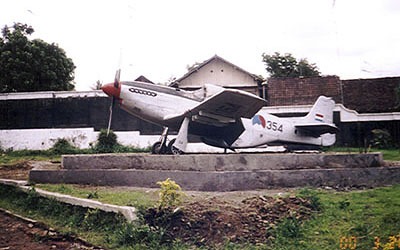 << Case # 47
Who?   Case # 48
Case # 49 >>
P-51 Who? Viewer Responses
Wiliam D. Yoak
This is challenging.I will say that I do not have any knowledge of the final outcome of this aircraft, but I am attempting to put whatever resources are available together.It looks like we still have something to work with as there is a '51 indicated on page six of the P-51D Survivors List.The call# code is the only "info" that appears to be available. The call# to which I am referring is F-354--listed as being on display in Indonesia. However, the national insignia on the Mustang in the photo is that of the Netherlands (almost sure). The flag of the Netherlands consists of three soild bars (red over white-over blue).This appears to be the same as the flag on the vertical fin as it is depicted in the photo. The no. 354 appears in this photo as well. Though the F preceding the no. 354 indicated in the list is not shown in the photo, I suspect two possibilites. One is that it may not be shown on the side of the "roundel" that is opposite of the number. The other possibility may be that it is not included in the aircraft (markings) if all Mustangs in a specific inventory or military squadron are understood to have F or any other letter as part of their call numbers.

Of course, this could be a coincidence that two aircraft from different nations have the no. 354 I must admit that my knowledge of paint schemes for some P-51's of foreign air forces is limited. I wonder if there is a slight possibility of an error in the Survivors List Section regarding F-354. Even the best mustang "historians" can make a mistake sometimes.My apologies if I am the one in error here.

My guess is that this mustang is still on display in the Netherlands or another European country. Hope this is helpful in figuring out Case #48.
Martin Kyburz
Truly a strange picture ! I cannot give a solution but some more info which narrows the search-path a bit: The NEIAF-markings must be fake since the NEIAF (Netherlands East Indies AF) received 41 a/c in 1945 which were given NEIAF serial H-301 to H-340 (N3-601 to N3-640). Many of these planes were transferred to AURI (Indonesian AF, later TNI-AU) sometime late in 1949, early 1950. The Indonesian AF later acquired some additional Mustangs from various (sometimes obscure) sources. They even received Cavalier-conversions as late as 1972. Within the Indonesian AF, the forner NEIAF-codes H-3xx were simply changed to F-3xx. The new arrivals seem to have received serials in sequence, although late deliveries got F-311 and F-312. There has never been an a/c flying with the NEIAF with serial H-354 !! 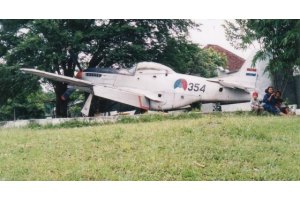