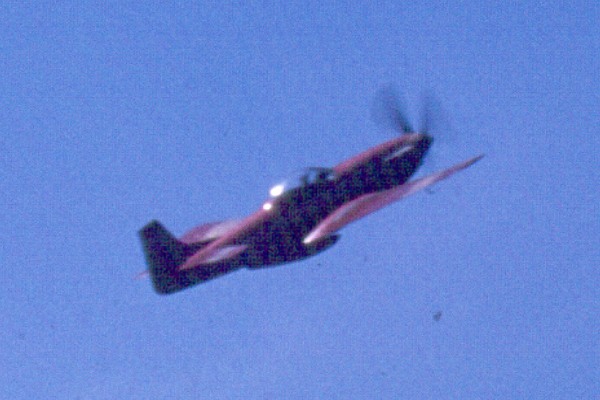 << Case # 54
Who?   Case # 55
Case # 56 >>
P-51 Who? Viewer Responses
Kim Powell
Aircraft appears to be PURPLE.............CLAY LACY ?? OR wasn't the MAYTAG ship purple back early 60"s ???
Chad Veich
Just a wild guess based on the color but could it be Clay Lacey's bird before the addition of the other markings it now carries? Don't have the registration although I could dig it up but I'm sure somebody will come along with it sooner or later.
Michael Edgecomb
The purple Mustang in case # 55 is Clay Lacy. Race # 64. Registation # N64CL.
Bill Eaton
This airplane is not Clay Lacy's. This is George Perez's N6523D. Note the gold stripes on the wings and the faint gold on the top of the nose and spinner. Look at the photo on page 105 of Dusty Carter's book Mustang: The Racing Thoroughbred.
MustangsMustangs
I think Bill might have a point here. The image is a big blow-up of an old slide, but you can see (barely) a stripe down the side and across the vertical stabilizer. Don't remember Lacy's with that. Perhaps the coloring of the old slide is giving a false appearance. Perez's P-51 is a dark maroon color with gold stripes. Just something to think about.

MM.com: The slide color is a little confusing, but this is George Perez's P-51 which is maroon, not purple like Lacy's. The gold stripes are hard to see, but they are there.
Case Closed! 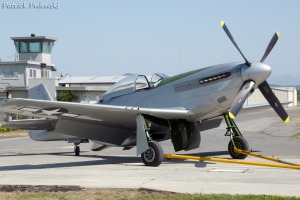