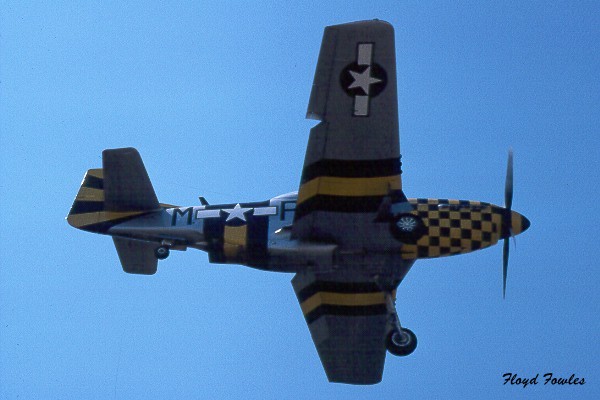 The P-51 was rebuilt using an ex Phillipine AF airframe and was complete around 1980. Later that year the aircraft crashed and was destroyed.

Again it was rebuilt, this time using an ex TNI-AU airframe. William Speer purchased 44-73027 and it was raced as #56. In 1993 it was sold to France and registered F-AZJM and flew as "Temptations". Whether there will be a rebuild of the wreck is unknown at this time.
Gregory Shaw
This aircraft did belong to the mustang pilots club based at Van Nuys ca. It did have a gear up landing at Mojave airport during a pilot checkout. However it was destroyed on a flight to Edwards AFB. for a show. Two people were killed in the crash. The pilot was Bill Barnes, Pancho Barnes son. The crash destroyed the airframe, I was the crew chief at one time for the mustang pilots club and on Bob Guilfords F4U-7.
Chief Rick
Bill was a very close friend of my father's. His passenger that fateful day was Cliff Hellwig. A high school friend of mine's father. Both of these gentleman (among others) put a lot of time into this aircraft. Knowing Bill as being meticulous, I'm buying off on the COOLANT LINE failure. My dad was first on scene with airport fire equipment. He said the aircraft was to join a formation with two other aircraft headed to Edwards when the accident occured. This 51 had a lot of TLC prior to the crash. The coolant line story seem's reasonable. It was reported that GLYCOL was impregnated into the helmet liners. (reported a number of month's later. Agency involved unknown).
Case Closed! 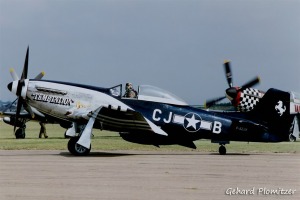