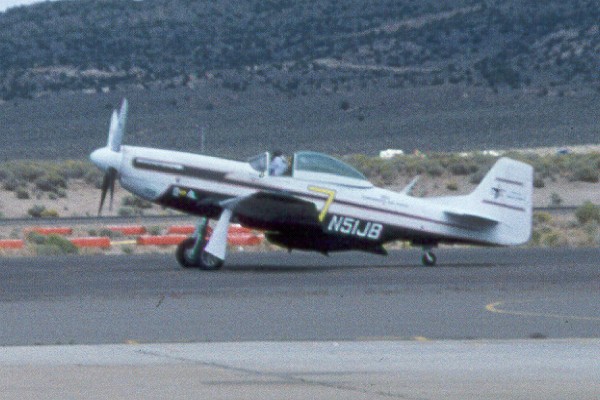 << Case # 60
Who?   Case # 61
Case # 62 >>
P-51 Who? Viewer Responses
Wiliam D. Yoak
This is S/N:44-73029-A which was owned for several years by Tom Summers of Friendswood ,Texas. Summers entered it on a couple of occasions at the Reno Air Races as #15 in the late 1960's and then as #7 in 1977 or '78.He called it Jaybee ,probably due to its registration of N51JB. Summers was more known in the air racing community as a Formula One contender more than an unlimlited competitor as the majority of his racing was in the Formula One Class. He owned and raced #15 "Sump'n Else" in the Formula One Class for several years.This is not to be confused with #6 Somthin' Else flown by the late John Crocker in the Unlimited Class although both aircraft raced at the same time period with almost identical names.The Mustang that Summers owned(Case#61) has been owned since 1980 by Jim Beasley, a lawyer from Philadelphia, PA . It is painted in WWII markings and is called The Bald Eagle.The aircraft underwent an extensive restoration immediately after Beasley acquired it in 1980 by what was then Unlimited Aircraft Ltd. in Chino, CA. It was completed in September of 1981.
Martin Kyburz
This is 44-73029, which served with 112 FS OH ANG before delivery to Nicaragua as GN122 on May 31, 1958; sold to the USA as N7779A on July 13, 1963 (Will Martin), 1963 (James Almand); to N51JB 1969 (Jessie Baker, Texas - racer #51), 1979 (Jim Beasley, Philadelphia, PA - racer #7) - suffered landing accident in 1984, repaired and flies today in 361st FG-colours as 'Bald Eagle' B7-E.
Jan-Aire van der Linden
N51JB, a P-51D from Philadelphia, sn# 44-73029 Bald Eagle, owner Jim Beasley
baker
Mr. Yoak's information is incorrect in that Tom Summers never owned N51JB. Summers was hired to fly and race the airplane by my uncle, Jerald L. Baker, who owned it at that time. I have pictures of the airplane (unpainted) back to 1970 when it was based at Conroe, Texas and later (painted as pictured) when it was at David Hooks Airport in Tomball, Texas and at Harlingen, Texas. The Mustang was registered to my aunt, Jessie Adele Baker, when it was purchased by Mr. Beasly. Summers earned a rebuke by claiming the Mustang's ownership when interviewed at the Reno Air Races by a leading aviation magazine (it came out as "Tom Summers, in his N51JB...."). The Mustang was later flown by both Jerald and Adele but no longer raced.

Jeff Corbin
Mr Baker. Your facts are mostly correct except the part of accusing Tom Summers of claiming ownership to N51JB. I knew your uncle Jerry and Tom both very well and your claim is far from correct. I have all the Reno and air race programs and magazines when 51JB was raced and know the history of this mustang very well. Mr Summers was of the highest quality pilot and gentleman so please make sure you have the correct facts before putting them in print. Tom Summers was a retired Lt Col in the USAF that flew fighters in WWII (P-51), Korea (F-86) and retired in 1968 flying F105's. A true American Hero! He maintained, and flew N51JB for Jerry in the CAF (not hired), he also did a solo aerobatic routine and raced it prior to his transitioning to Formula 1 racing.
CASE CLOSED!!!
Case Closed! 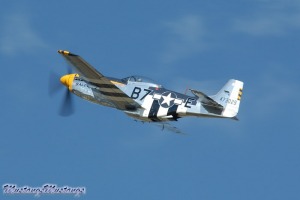