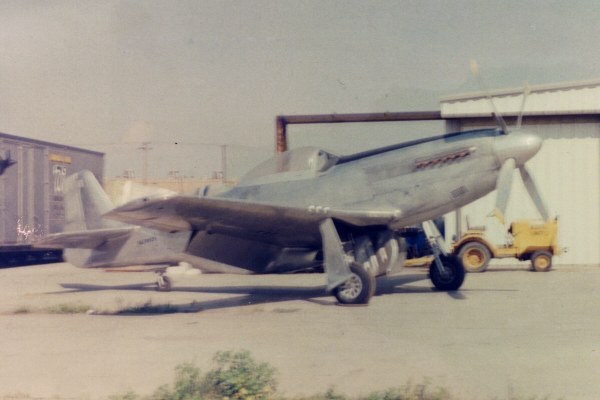 << Case # 81
Who?   Case # 82
Case # 83 >>
P-51 Who? Viewer Responses
Wiliam D. Yoak
This one is somewhat of a challenge. It appears that there is a support trailer (for air race crews) immediately behind the Mustang. If this was a race trailer,I would venture to guess that it was for the former "Mangia Pane" Owned by Bill Destefani and raced by Ron Hevle from 1980-1981 and then by Destafani himself. The trailer most resembles the one that Destefani and Hevle used for both this aircraft and Dago Red through 1982. Mangia Pane was a well prepared aircraft externally and probably internally as well (for racing), after Hevle first raced it.Judging from the time this photo was taken,it was probably in late '79 or early'80 (prior to having been prepared to Destefani's specifications) if this is in fact that aircraft. I must admit the photo has a significantly different appearance than what the aircraft looked like after having entered copetition.Such differences include the gun blisters and the appearnce of the bare aluminum.

If this is what was to become "Mangia Pane", the Mustang is known today as the "Iron Ass" owned by Hugh Bickle and based in Hollister, CA.
Brad Haskin
I'm going to go out on a limb and say that Case #82 is NOT Bill Destefani's "Mangia Pane".

Tiger registered "Mangia Pane" as N72FT ("FT" standing for Flying Tiger Farms). The registration number on this airframe is much longer than that, though I can't read what it says.

The picture is definitely at Tiger's hangar at Shafter, but the "Mangia Pane" trailer in the background is already painted in "team colors", which suggests that the photo had to be taken after 1981. "Mangia Pane" first raced in 1980, all unpolished aluminum with a yellow race number. In '81, it had the yellow/black checkerboard scheme it wore until '84. So the trailer doesn't match with the plane as far as timelines go.

A different suggestion as to this airframe might be the Mustang that Tiger restored in 1983/84 in white RAAF colors. I have a photo of Mangia Pane, Strega, and the RAAF Mustang all flying in formation from about 1983. It now resides with Jack Erickson at Tillamook, painted as a Tuskeegee "red tail".

Interesting theory. The N number blown up is not N72FT, but the best I can tell it is N474494. It is hard to be exact because the blown image is not very clear. But there is definetly a 7 near the beginning, and a '4' at the end with '4's and '9's in between. I don't have a record of it carrying this N number, but if it didn't carry this number, doesn't mean nobody ever painted it on.
TJ Johansen
Here's another possibility regarding the identity for case #82. Could it be Dick Vartanian's N74978 44-74978 which burned up in Wally McDonalds hangar at Mojave in 1988? I know this bird was bare aluminum with a small N# on the rear fuselage in later years, and there is even a photo of it in Paul Coggan's book Mustang Survivors, which I unfortunately don't have available to look through at the moment!
Dick Phillips
This plane is N74978, 44-74978, ex N6169U. Here's the history.

Last saw US service with the 182nd FS, Texas ANG. Transferred to Costa Rica via the Reimbursable Air Program directly from the Texas Air National Guard. It was delivered to the Guardia Civil on 16 January 1955 by USAF pilots. It became aircraft #4. This mustang was sold to the MACO Corporation on 31 March 1964. It was registered N6169U. Later it was reregistered as N74978 in order to match its military serial number. The aircraft sat derelict at Mojave, California for a number of years until returned to flying condition in 1984. N74978 was destroyed in a hangar fire in June 1988.

I have a couple dozen photos of it, several in the colors of the #82 photo
Case Closed! 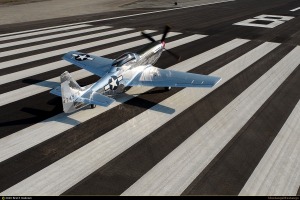