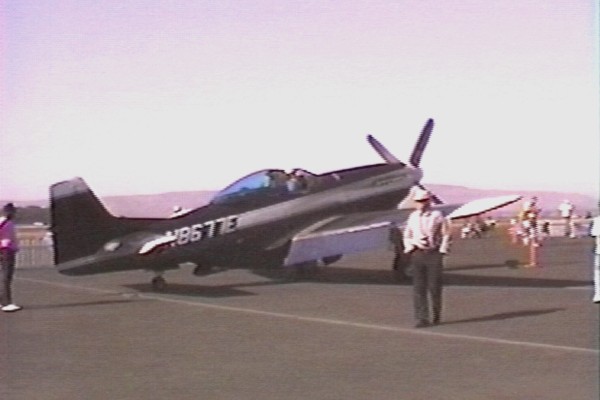 << Case # 94
Who?   Case # 95
Case # 96 >>
P-51 Who? Viewer Responses
David Daly
This mustang N8677E 44-74865 and flies as The Mormon Mustang, according to Dennis Bergstroms list this bird is still flying.
Martin Kyburz
Case #95 was easy - one of the few Mustangs to retain the same civil registration since surplused form military service. This ship is 44-74865 which served with the RCAF, serialled 9258, at times serving with No. 402 Sqdn, coded AC-258. In 1959 this a/c was s.o.c. by the RCAF and sold to the U.S. (Aero Enterprises , James Defuria), becoming N8677E. Ownership changed 1961 to Walter Erickson, 1965 to Don Novas and sometime 1998 to Gene Mallette. Today, the a/c is flying as 'Mormon Mustang' in the colours of the 357th FG 364th FS.
Richard McPherson
In 1965 I got to fly her three times with Don Novas in the back seat out of Blackfoot, Idaho, when I was attending the Navy Nuclear Power School at NPTU Idaho. My father was a Navy Pilot who started my flying at 13 on a Ryan STA and Fairchild 24.
Anthony Mercadante
I don't know the other Gentleman but I do Know Richard McPherson, if he says he flew it then I believe him without Question.
Doug Rogers
I was actually fortunate enough to get two rides with Gene Mallette in his P-51D Mustang. It was back in 2001 and each ride was close to 2 hrs in duration. Aircraft name My Sweet Mary Lou. Aircraft # N8677E
Ray Brooks
I recently bought some old Air Classics magazines. In the April 1977 edition there is a pic of this Mustang. It is in the paint scheme of the picture at the top of this page but in badly weathered condition. The plane was at Blackfoot, Idaho and the caption of the pic said that the owner also had a Wildcat in poor condition. The FM2s number is N5891? . The last numeral is hidden. It could be a 3,6,8,9,0. I will do some research today.
Steven Bennett
N 8677E is still flying and is still owned by my brother Gene Mallette based in Helena MT

Flying under the colors of"SWEET MARY LOU" aptly named for his lovely wife. The gear doors carry the names of their daughters.
The aircraft won the distinction of "Best Military Restoration" in Reno at the 2021 Reno National Air Races.

Gene will fly her in the Reno National Air Race Championship in Sept. 2022.

We are expecting nothing less than First place.
Case Closed! 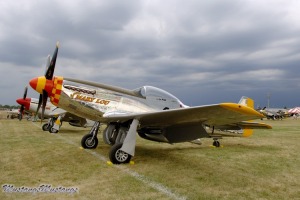