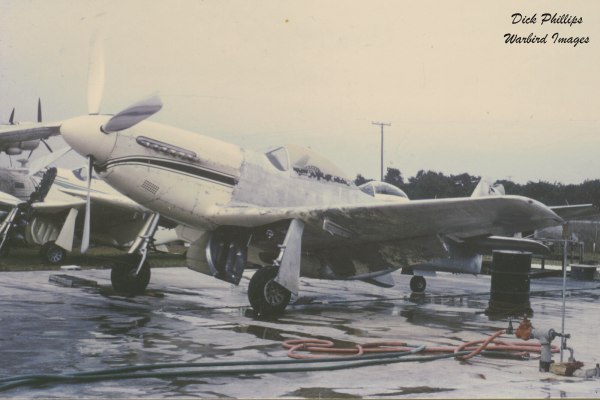 As I think about this airplane, I seem to remember a photo like this in the Doyle archives somewhere. I believe that its N no was 77UP. That chromed prop may very well have ended up on N151BP now owned by Bob Pond or maybe that is 151BP. It would be the first P-51 that I flew. Because of the chromed prop and all the bondo Doyle used, we called it the lead sled.
Joseph Scheil
I admit that I cannot tell what Mustang this is, but it was taken at Trans Florida Aviation in Feb 1965 if my guess is right, and the civil scheme Mustang behind is N151Q. TFA was doing a big IRAN for the FAD at the time and I bet this Mustang was about to go south, though not necessarily for the FAD.
MustangsMustangs
Thanks Larry and Joe. We do not know the identity of this one. Thanks for the clues. Keep on it.

N77UP, 44-73856, now N7TF "Susie" owned by Friedkin.
N151Q, 44-74739, now N51RH "Ole Yeller" was rep. rebuilt by TFA in 1962 and again in 1967
John Chapman
After conferring with my father (also John Chapman) who worked for Cavalier Aircraft, he believes the plane in the foreground to be N7724C, that became N3751D and later F-AZAG and finally Charles Osborns "Hurry Home Honey" The Mustang in the background appears to N151Q whose fuselage became "Ole Yeller", also according to my father the wings from that aircraft now reside under N51DL. Dad also said this area was set up North of the hanger for the paint stripping operation after one of the employees attempted to apply stripper inside the hanger and nearly gassed everyone.
MustangsMustangs
Thanks John, good info.
We are going to leave this one open for another week or so, please send in your responses.
Bill Lamb
I believe this is 44-73656.A closeup photo on page 212 of the book "Wet Wings and Drop Tanks" shows Howard Olsen's N5073K.The chrome prop and gray exhaust shrouds match,but the odd taper of the Cavalier stripe is the only one I have seen like that.Recently known as Vlado Lenoch's "Moonbeam McSwine"
Terrysonday
What happened to mustang 44-14419 Jenall. I can't find it in your file
John Chapman
Notice the Canadian DC-4 "North Star" in the background? It was part of Air Caicos, all white with a lightning bolt down the side in either black or dark blue (I don't remember which) and was aptly name "Moby 1". Was really cool to hear 4 Merlins singing at one time.