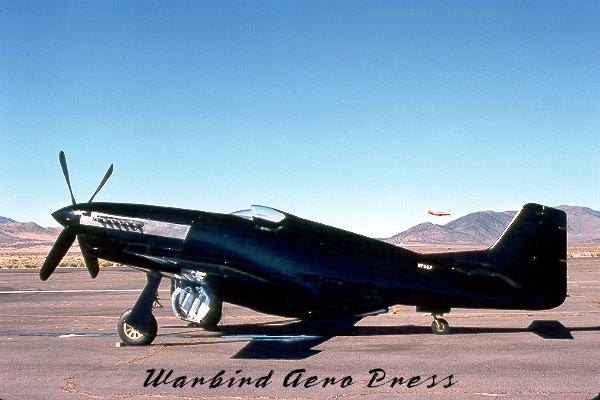 << Case # 214
Who?   Case # 215
Case # 216 >>
P-51 Who? Viewer Responses
Bob Burns:
that's N70QF race 34 foxy lady later raced by john crocker N51VC sumthin else and is now N351DT Kentucky babe configured as a TF-51. I don't remember the year it arrived at Reno all black an then had the lettering put on in the pits..
Jacques Bourguignon:
Case215 is Ken Burnstine's "Miss Foxy Lady" N70QF.
Burnstine bought this originally P-51D-30 registered N6321T for the 1974 Reno Race campaign. It had previously served with the Royal Canadian Air Force. Modifications seen on this picture were made at Chino Aiprort in the late Leroy Penhall's hanger.
Flight tested at Chino, this a/c was ferried to Reno where its registration was changed to N70QF, race number 34 assigned and the racer was christened "Miss Fox Lady".
Unfortunately, the airplane was put out of competition during this 1974 Reno Championship because of a backfire that had blown off the lower cowling and induction system. Ken finally won the race with his other P-51, race number 33, in which Ken died 2 years later after a crash before the 1976 Mojave race.
Marc Koelich:
This is 44-74502, N07QF, Miss Foxy Lady, race34, when owned by Ken
Burnstine, seen probably before the number 34 and the girl were painted
on the fuselage.
It also flew in a white livery, still with No 34 and a different girl
painted on the rear fuselage.
Prior to being modified as a racer, this Mustang was RCAF 9232 and
N6321T.
It was later purchased by John Crocker and became N51VC, racer6, Sumthin
Else.
It was damaged in 1990 and was restored and converted to TF-51D between
1998 and 2000. It is now owned by Dick Thurman and flies as "Kentucky
Babe".
Dave Zeuschel Jr.:
I believe the black modified P51 Mustang in the unsolved category is Ken Burnstein's Foxy Lady.
Case Closed! 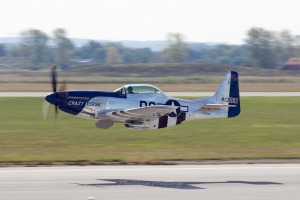