<< Case # 222
Who?   Case # 223
Case # 224 >>
P-51 Who? Viewer Responses
Joe Scheil:
P-51D 44-73857 RCAF 9245 N6351T to James Defuria. Then as N651D to Richard Snyder as a racer "Miss Phoebe II" #45. The aircraft was modified with a wet wing at this time. The aircraft passed through two more owners before Don Plumb of Windsor, Ontario bought her 23 January 1975. Quickly passing to John Bolton of Sandford, FL 21 February 1975 she was destroyed less than 8 months later, crashing alongside CF-USA and Don Plumb, 15.10.75.
Norm Shea:
The plane in this case, # 223 figures prominently on the CD. This is N651D, 44-73857, Johnny Bolton’s “Hi Honey” sitting on the runway at Sanford, FL.
Dick Phillips:
This is "HI HONEY" N651D 44-73857, ex N6315T, ex RCAF 9244.
It went thru seven owners between RCAF service and 15 Oct 75, when it crashed
near Big Spring, TX, killing owner Johnny Boulton. He was flying with Don
Plumb who was in CF-USA, and they both crashed within 5 miles of each other,
but it was not believed to have been a midair. They both flew into the same
Texas thunderstorm, and didn't make it.
Richard Burgan
Just a few misspellings in your text. The name is spelled "Bolton", he was Ford Dealer in Maitland Florida, Johnny Bolton Ford. The location for the plane was "Sanford" Florida. I watched him fly that thing in the sky over Maitland many times. He certainly knew how to have fun with it. I assume that he was strictly VFR and never had any IFR training.
Bob Bolton
They took off from the Lazy E ranch that the Edwards Brothers owned (both of them are deceased now) and both got caught in a thunderstorm. There were 4 planes that took off, two of them made it out and my dad and Don Plumb both crashed. My dad actually had a passenger, Norm Danielson, who used to be the dental assistant for Dr. Steve Shulke, who died in a trainer plane with his son a few years earlier. Dr. Shulke used to fly Mustangs and inspired my dad to start flying.

Incidentally, the plane was equipped with radar.
Case Closed! 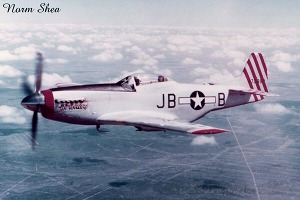