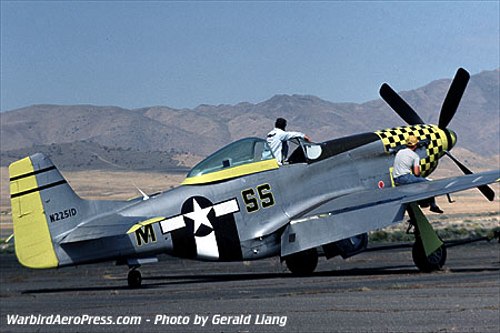 << Case # 277
Who?   Case # 278
Case # 279 >>
P-51 Who? Viewer Responses
Roger Baker
I would say that that's Hoovers' old airplane 44-74427 while it was owned by Steve Schulke.
Brad Haskin
N2251D at Reno '75 when it was owned by John Stokes and part of the CAF collection. It was raced at Reno that year by Vernon Thorpe, and had a very ingeneous 'garbage can' spraybar system installed by Ralph Payne and Vernon. They literally went to the hardware store, bought a big garbage can, some copper tubing, and duct tape....strapped the can in the back seat, submerged a pump inside, and hooked it up in front of the radiator. Worked great until the garbage can ran out of spraybar water!
Al Barrs
I know this response is late, but I thought it important to say that I was a close friend of Dr. Steve Schulke when he owned Doc's Doll from 1970 until his death in an air accident in at T-34 in Lake County, FL on February 16, 1975. Doc's Doll was sold that same year. This is the only photo of sn 44-74427.

I flew with Steve in his Cavalier Mustang II. I also designed, built and installed a set of camper modules in Steve's Lockheed Learstar in his flight around the world from east to west tracing the legs of an earlier world record east to west flight.

Carolyn S. Schulke
This is most definitely "Doc's Doll" My Daddy loved to fly, and he lived this life to its fullest. I miss him terribly-- GONE TOO SOON!! I love you Daddy!! <3
Phil Schneider
I met Steve Schulke in 1965 when I joined Paragators at the Kissimmee Airport. He became a good friend and he ended up being my dentist. What a great dentist. I made many jumps with Steve around Florida. I also jumped at Steve's home in Winter Park when he lived on a lake. His wife Peggy was as nice as he was. I left the Orlando/Kissimmee area about 1968 to head to Florida State University. I lost track of Steve after that. One time when I was home in the mid to late 70s visiting my mother in Winter Park, Florida, my mom gave me a newspaper article about Steve's aircraft accident. Steve was a wonderful guy.
Case Closed!