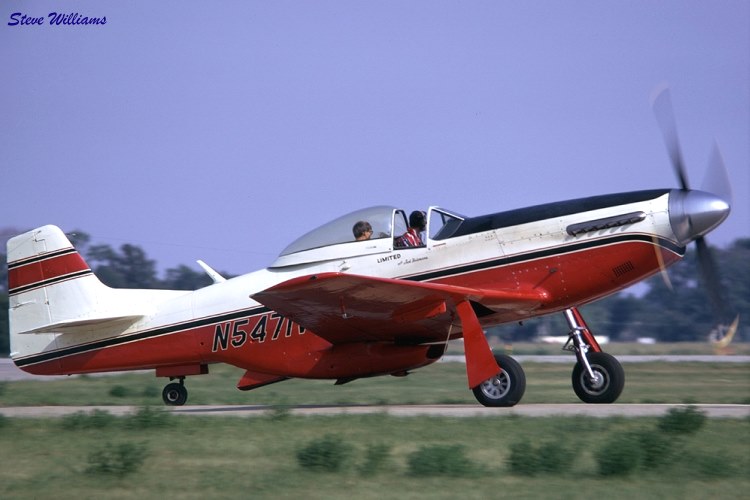 << Case # 336
Who?   Case # 337
Case # 338 >>
P-51 Who? Viewer Responses
Martin / Swiss Mustangs
45-11381 N5471V 1970 Oshkosh
Tom Huismann
That is N5471V, my father's P-51. Jack Huismann, my father, later had it painted in the colors of William Shomo's "The Flying Undertaker." The airplane was based at the Waukesha airport in Wisconsin and then later at EAA's hangar in Burlington, Wisconsin. He sold the airplane in 1974. Growing up, I was lucky to aquire many back seat hours in 71V. Someday I want to fly a P-51. If anyone out there has pictures of N5471V, please e-mail them to me.
Brad Haskin
Sold in 1974 to Ed Browning's Red Baron Flying Service. Raced as #1 "Flying Undertaker" for a few years by George Roberts, Darryl Greenamyer, and John Muszala". I think it was sold to Don Davis in Casper, Wyoming, but crashed shortly afterwards.
Robert Gollwitzer
Does anyone know what happened to Jimmy DeSanto's P51 that he raced in Cleveland after WW2.It was supposed to be the first clipped wing P51 & was named Connie. He also flew a P38 & almost didn't make it out of the Curtis P60 that crashed at Cleveland. I was a go fer as a kid in Cleveland for him & was there when he bailed out of the P60. Bob Gollwitzer
Dick Phillips
Jimmy DeSanto's P-51K N68183 44-12141 was sold to Israel in about 1950. It most likely was kept in reserve for spare parts to keep the other mustangs that were obtained from Sweden and Italy, in working order. There has never been an IDF serial assigned to the aircraft, that I have been able to discover.
James Miller
I believe that is me sitting in the backseat as I had a ride
in 1970 at Oshkosh as I was looking after the airplane for the
week of Oshkosh. I would clean off the exhaust and clean the
canopy after each flight. I did the same thing in 1969 at
Rockford and was invited back for 1970.
Case Closed! 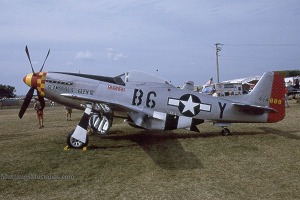