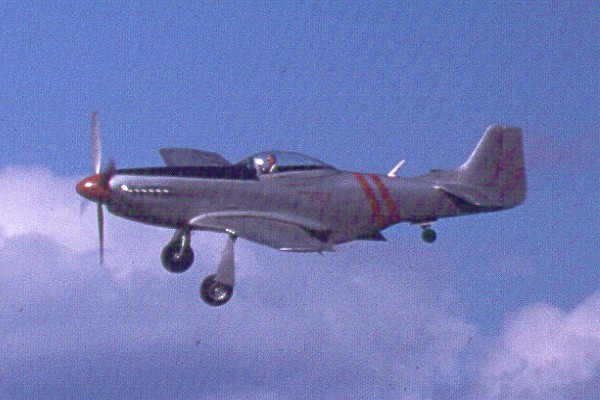 << Case # 53
Who?   Case # 54
Case # 55 >>
P-51 Who? Viewer Responses
Jim Church
The paint scheme on this Mustang looks similar to that worn for a time by N117E, s/n 44-73832, when owned and raced by the late Frank Sanders. If it is, then it was previously registered as N2873D. Later repainted in a 'sort of' W.W.II paint scheme, it was very heavily damaged in a crash landing in Mississippi in '78, which saw both wings ripped off and severe damage to the rest of the airframe. It was later rebuilt by George Baker for Doug Clark in Florida, as 'Hurry Home Honey,' the late Richard 'Pete' Peterson's mount with the 357th F.G..

The paint scheme was not entirely accurate, however, as it lacked the squadron's red/yellow nose checks, and was painted light gray instead of silver or bare metal on the lower fuselage, along with the correct olive drab upper surfaces. It was owned for a short while by Bob Byrne, before passing on to Harvey Hunewill, who was killed in it in '92 while buzzing a cattle drive. Same aircraft as featured in case #33.
William D. Yoak
This looks like the P-51 that was owned by the late Frank Sanders in the mid '60's. This photo(case #54) was probably not taken at Reno,though. It was most likely taken at the Las Vegas Air Races in 1965. This is the only race that I know of in which Sanders was a participant. Though he did appear at Reno on numerous occasions in his Hawker Sea Fury and in his Red Knight T-33,this was soley for aerobatic routines for which he became well known for over the years. Frank was blind in one eye due to an accident which occured during his childhood. This may have been at least a partial factor in his decision following the 1965 Las Vegas races to not continue in unlimited closed-course pylon racing due to the close formation flying at 400+ MPH speeds. His aerobatic performances seemed to never be limited, but I don't recall them ever having been in tight formation with other aircraft (in the T-33 or Sea Fury). Hope this "info" is helpful.
Bill Eaton
Frank Sanders' P51 had much wider stripes around the aft fuselage and in a lighter color, perhaps yellow. His airplane also had a checker pattern around the forward cowling and on the top of the vertical stabilizer, and a painted spinner in the light yellow (?) shade. There was also a large, dark colored "N117E" on the vertical stab. See page 79 of Dusty Carter's Mustang: The Racing Thoroughbred.
Gregory Shaw
This 51 was owned by a Sol Pussey? and based at van nuys airport in CA during the late 1960s it was used by Bob Hoover at the reno air races one year as a replacement for his broken aircraft. I think it was in 1969.
Ralph Payne
This is N7711C on final at RNO for the 1969 air races. Darryl Greenamyer is the pilot, S. J. Pusey a "Flying Tiger" A/L pilot was the owner at the time. The a/c was destroyed in a fatal crash sometime in the late 70's.
MustangsMustangs
N7711C, 44-72936 owned by Sol (Solomon) Pasey from Coatesville, PA in 1969. Destroyed in crash in 1979 while owned by Warren Schulden from New Jersey.
George J. Angerman
My heartfelt sympathy goes out to you Marion. I knew you "Uncle Buddy" when this P-51 was stationed at Chester County Aviation in the early '70s. We became friends when we both shared a common interest. We had both served in the same Squadron @ NAS Cecil Field. Dutch a little earlier than I as he was flying the F-8 Crusader with VF-174. Myself as a Airframes Troubleshooter with VA-174 then flying the A-7 Corsair II (commonly reffered to as the "SLUF"). We shared quite a few Seastories together and I actually had the priviledge of getting a back seat ride in this bird before this color scheme. I believe this photo to be taken @ The Chester County Airport (Coatesville, Pa)prior to its sale. Thank You very much for posting this.
Blue Skies to you Dutch...I miss you.
Michael Cuy
My Cousin Darleen Schwark married Sol Pusey in 1971 and Aunt Ceil left a few photos of Sol by N7711C while he owned it. I have a few photos of it from that period parked on the ground in CA.
Case Closed! 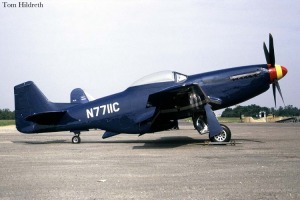