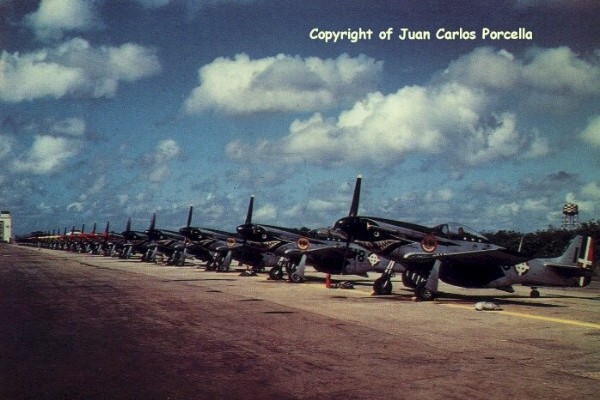 << Case # 64
Who?   Case # 65
Case # 66 >>
P-51 Who? Viewer Responses
MustangsMustangs
See if you can count how many P-51s are in this photo and identify as many as you can.
Ryan Short
Regarding the photo. Is that as high of a resolution as you can get. I can definately count 14 Mustangs but my guess would be that there are probably 16. This would make sense if it were a complete squadron. The P-51s are in Dominican Air Force markings. Actually after looking at the photo again, there's probably only 15 in the picture. Notice that there are 3 sets of planes have the same color of nose for all 5 aircraft (3x5=15). It would appear that there is maybe a high wing aircraft behind the last set (maybe a Norseman or something like it).
Dax Roman
This is the "Escuadron Caza Ranfis" from 1957-58 of the Dominican Republic military aviation (AMD). In the photo are approximately 25 or 30 P-51. They painted the shark mouth in 1955 and put different colors for the different squadrons. The colors were black, red, blue navy, orange, yellow, and possible green. The squadrons were composed of 5 planes, four for the flights and a fifth as supplement. The number in the tail represent the position in the squadron. The container of water that you see back in the photo remains in the same place with the sames colors. The photo was in San Isidro Air Base, Dominican Republic.
J Upwood
My dad was a P51 pilot over Iwo Jima his plane was #65. Do you have any info on him or his plane? His name was Jack Cronk.
Thanks
Jackie