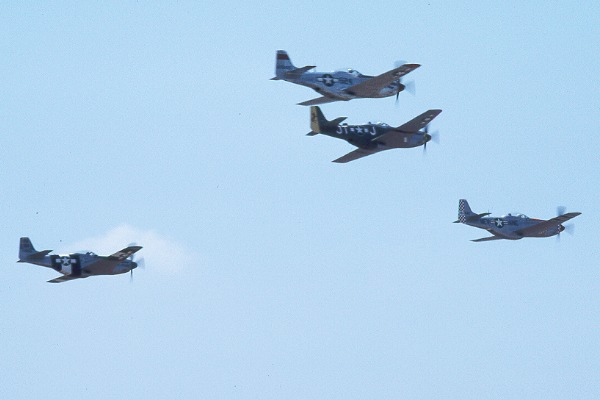 Also, I believe Jumpin-Jacques was donated to the San Diego air museum (traded for a T-28) shortly after 1983 and is now painted in the colors of the 332 fighter group.
Jon Kingsley
The Mustangs in this picture were taken at the Gathering of Warbirds in Madera, CA in 1983. There were 27 mustangs on the ramp that year (at the time, the largest gathering of Mustangs since the Korean War). One of the aircraft belongs to Bill Hane of Arizona (Ho Hun) and another to the late Robb Satterfield of Texas (Miss Torque).
Martin J. Filiatrault
A correction to the above, it rained at Madera in 1985; I was in a tent, camped at the airfield! That was the year that two P-47s were in attendance. I can't account for '83; that was one of the few years I missed. If, by chance, this photo was taken in 1982, I'm in the jump seat of "Ho Hun". This was my first Mustang ride, and I did fly in formation during the airshow... but my camera malfunctioned during the flight, so all my photos were lost; I was heartbroken!