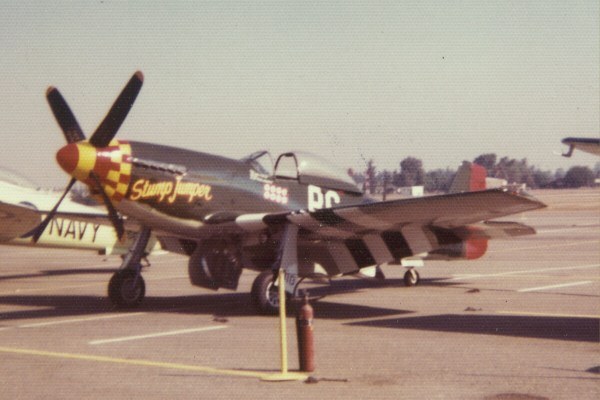 << Case # 80
Who?   Case # 81
Case # 82 >>
P-51 Who? Viewer Responses
Steve Mesner
This one was flown by an Air Force Captain named Robin something. I've got a magazine article on it somewhere I'll look up if no one else solves it but this one shouldn't be that hard. I'm pretty sure it's a former West Virginia Air Guard bird.
Jim Church
Case # 81 shows Jerry Hayes' Colorado based 'Stump Jumper,' s/n 44-63810, N63810. While restoring this aircraft, Robin Collard (a USAF Colonel) found the name 'Stump Jumper' under many layers of paint, and as I recall it this was believed to have been added following an accident the aircraft suffered while serving with the West Virginia ANG. Hayes had a pretty bad belly landing in this aircraft, and while it was being rebuilt, he sold it on to Bernard Rauls, of Zephyr Cove, Nevada. Before the rebuild was complete, it was sold again to Dr. Joesoph Newsome, of Cheraw, South Carolina. He had the Lauderback brothers complete the rebuild at the Stallion '51 facility in Florida, and it emerged it the colors of Bruce Carr's 'Angel's Playmate,' of the 354th FG, Ninth Air Force, with the new registration N451BC. It is still owned by Newsome and continues to fly in honor of Carr, who recently passed away.
Max Woodhead
I am sure you know this one already as its in your survivors database. Stump Jumper is now Angels Playmate 44-63810, owner Joe Newsome. As Stump Jumper it was owned/restored by Major Robin Collord USAF, who subsequently sold it to Jerry Hayes. After a wheels up landing it was sold on, repaired and eventually became the property of Joe, at least this is my memory of what Robin Collord told me a year ago.

Stump Jumper first came to my attention in a article in a 1976 UK magazine, I fell heavily for that particular P51 and built an RC model of it, Robin Collord sent me colour photos and lots of details. It is still my favourite of all Mustangs. 25 years later I got the urge to build another bigger/better RC Stump Jumper and have just finished it. It had its first engine run last weekend. I am still in touch with Robin who now is a captain for American Airlines. I am hoping that Robin can be present in the UK for its maiden flight.

In 1994 I was fortunate to get a ride in a UK based Mustang to/from an airshow about 90 minutes airbourne and orbited the field as Concorde taxied out and took off! A day to remember.
George Spencer
I am 84 years old now. I think it was 1992 that I was able to meet Joe Newsome nd obtain for him a 24 volt d.c generator which was just the ticket. quoting John Brown, Merlin specialist and long time friend at Rolls-Royce.Joe was pleased with that generator. My friend Col. Duncan W. Rabey and myself were going to have some fun around Joe, week-ends in Cheraw. (Joe was a busy doctor) but Duncan was killed in a car accident and I never did get back with Joe.
steve brookshire
Hi My wifes nuncle Earl K Osborne was the crew chief of the Angels Playmate Heard a lot of stories from Earl and his brother Fred, my wifes dad, who was the crew chief of the Shillalah the 2nd Bruce actually flew Freds plane once but Fred already had a pilot and Earl had lost his and Fred liked Bruce and talked Earl into taking Bruce on as a pilot. I never heard Fred tell of his pilot but once His plane was shot up bad and as he was coming in over the Channel He radioed back to say he wasn't going to make it in and it was a hell of a cold day to take a swim. Both really liked Bruce and would tell of his shooting and flying abilities wished I had them record all their stories as they passed away in the 90's Have a few pics especially of it on display under the Eifel Tower Our hats off to these Guys !
Jacob Stump
To anyone who may be interested, I have a 28" x 22" poster of the Stump Jumper, piloted by Jerry Hayes. The poster is a photo taken by Michael O'Leary, and while there is no date on the poster, I'm guessing it to be from the late 70's or early 80's.The back of the poster has a long history of the P-51 aircraft, and a short history of the Stump Jumper itself, including the story of removing the paint to discover "Stump Jumper" underneath. As it's a little old, it has a few noticeable creases, but it's overall in good shape. I'd be willing to sell it to someone if it hold particularly strong meaning to you. As for myself, my last name is Stump, and when I was little (not knowing of this aircraft) I used to call myself "Jacob Thomas Stump-Jumper", because my parents always told me to stop jumping on things! So it's more of a serendipitous amusement for myself, and I'd be more than happy to part with it if someone else feels an emotional connection to it.If you're interested, I can email you photos of the poster in it's current condition. Please email me at jacobstump1@gmail.com. Thanks, Jacob
Tom Bell
I am a bit confused by thia article. I install all the avionice for Bernie Rauls. I have flight time in this ac as completed. On Bernies death the aircraft was sold. Please clarify for me. Thanks
Gerry L Humphrey
Hi--I am trying to locate info on Lt Dean N Post Jr,
KIA 27 May 1944, France. Wing No. 42-106632--MACR 5110.
Jerry Hayes
Does any one know to contact Robin Collard?
James Taylor
Jacob Stump.
Am very interested in the poster as my brother in law's father replaced the Allison engine with the Merlin Packard engine in it.
Thank You,
James S. Taylor
Down in Georgia USA
Case Closed! 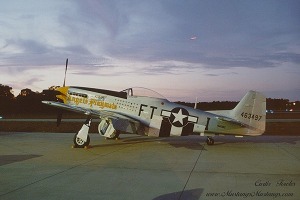