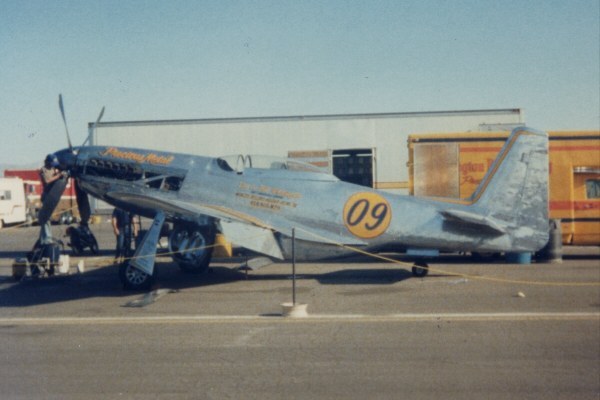 << Case # 95
Who?   Case # 96
Case # 97 >>
P-51 Who? Viewer Responses
Brad Haskin
N5483V was bought by Gary Levitz in the winter of 1974 from Eddie Fisher....about the same time that Burnstine was buying the other airframe. Levitz hired Ralph Payne to completely tear down the plane and rebuild it as a racer. According to Payne, the plane hadn't been flown in many years when they brought it out to Scottsdale, AZ. Payne built 5483V up for Levitz about the time Leroy Penhall was making the "sister ship" into N70QF "Miss Foxy Lady" for Burnstine.nnPayne rebuilt 5483V in stages, including several "internal" wing mods and such. It was "stock on the outside" at Mojave '75. Clipped wings and a racing canopy at Reno '75. An H-tail and wing fillets at Mojave '76. (Plans included removing the doghouse and installing NACA ducts on the fuselage side, with the radiator exhaust exiting in the low-pressure area behind the canopy, but the racer was sold before those mods could be done)nnDon Whittington bought it in June or July of '76, and raced it at Reno in '76 as "Miss Florida III" (though it still said "Precious Metal" on the cowling). Whittington changed the name back to "Precious Metal" in '77 and continued to race it with a fair amount of success until '83. At this point the airplane was "stashed", completely barren of markings and didn't surface again until about '87.nnThis airplane was NOT modified to accept a Rolls Griffon As I understand it, Whittington built up the "new" Griffon powered "Precious Metal" after he got out of "camp". He literally unbolted the tail section (just aft of the doghouse) of N5483V and bolted it onto the "new" fuselage. I have no record where the "front" half of the fuselage came from. Possibly built up from parts. It raced at Reno '88 in this configuration, but crashed when the prop governor blew.nnAfter the wreck it was trucked back to Florida, the tail section (with the H-tail) was again unbolted and set aside. Whittington took the "new" Griffon fuselage and bolted a stock tail unit onto it in '89. Meanwhile, another stock tail unit had been installed on the "old" fuselage that used to be 5483V. This is the airframe that Whittington ditched in Galveston Bay in '90. I believe it's still at Darrell Skurich's place in Fort Collins, CO being stored or rebuilt.nnWhittington race the "new" Griffon bird with the stock tail feathers at Phoenix in '95, with the registration number changed to N6WJ. But the same plane showed up at Reno '95 with the "old" N5483V tail section (with the H-tail) bolted on to it again.nnEveryone confused? Good. I think that's what Don Whittington had in mind.nnI might also add another footnote of the N5483V story.nnAfter Levitz bought it, the first race he entered it into was Mojave '75. On the entry form, he made a mistake and wrote down the registration number of another Mustang he used to own, N5478V (which another pilot had wrecked in the mid-60's. The guy was ferrying it for Gary, and cartwheeled it into a hangar on takeoff.) Anyhow, because N5478V was on the entry form instead of N5483V, both Air Classics and Racing Planes and Air Races reported for many years that it was N5478V.nnJust a sidenote further adding to the mystery of the plane.
MustangsMustangs
Mustang historian Dick Phillips (rightfully so) calls this P-51 "a very mixed up airplane". I have heard the above account several times, but I have to check it twice every time it comes up.
Beverly Douds
I have a photo of a airplane during WW2 and on the plane is a lady painted and the name "Miss. Florida", I do know the name of the man on the right but nothing about the pilot or the man on the left and the airplane it self. I would like to sent you the photo and get a little info on the airplane and the pilot (or the man on the left)
Let me know if I can sent you an attachment.
Thank you,
Beverly Douds
Port St. Joe, Fla.