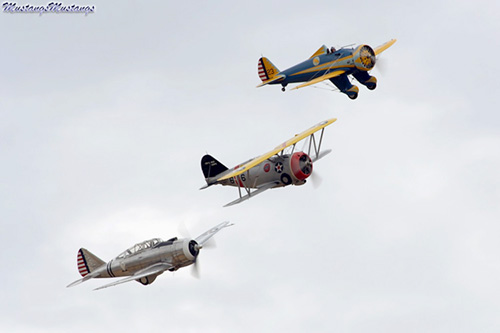 That's right, look around and you will see a Fokker Tri-plane in the air along with the Sopwith Camel. What a pair. They rounded the pattern several times with the infamous sound of the Camel's engine that is "on" or "off". The Sopwith's engine is not controlled by a throttle! The Fokker sounded real smooth and quiet, not like a early generation fighter.

Although these two WWI Fighters are not fast, they can turn and change directions very quickly.

The POF Boeing P-26A is one of only two existing today and is the world's only airworthy model! The Planes of Fame Peashooter was recently restored and finished just before the show. The P-26 entered US Service in 1934 with 148 built.

The Seversky AT-12 "Guardsman" was a two-seat version of the P-35 fighter. This version was developed in 1937 for export to Japan, Soviet Union and Sweden. This aircraft was one of 50 (out of 52) held back from Sweden because of the Nazi invasion. The US Army Air Corps kept the Guardsman for training.