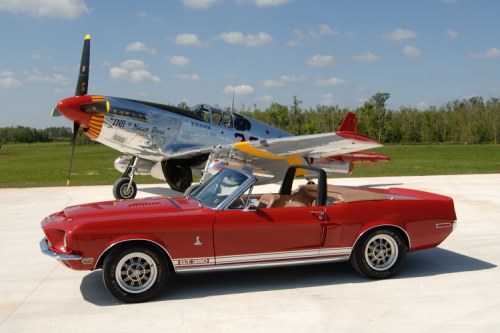 I might be a bit biased, but I really like this show. Fantasy of Flight, Imperial Mustangs of Polk County and Mustang Club of America all need to be congratulated. There were cars and aircraft for all to see. The mustangs at the show were some of the best I've seen. Concourse judging by the MCA will bring out some beauties.

The staff at Fantasy of Flight were excellent hosts and the show went on very smoothly. Imperial Mustangs of Polk County is the Ford Mustang Club in charge of the event. They did a super job bringing in some great cars and vendors. The three days was a big boost for being able to see everything. You could take your time checking out the cars, talk to the owners, watch the Mustangs & Mustangs get together each morning for photos. There was some WWII memorabilia on display as well as all of the Fantasy of Flight aircraft in the museum.

The weather was perfect, sunny with reasonable temps, scattered clouds, slight breeze on most days. Be aware that the Florida sun will hit you hard if not used to it. Food was good, people were great, cars were awesome and there was a P-51 flying each day. Three came in during the show: Dave Marco in "Sizzlin' Liz", Jeff Michael in "Obsession", and Lee Lauderback in "Slender Tender and Tall". Each put on a great take-off for the crowd and a photo pass or two.