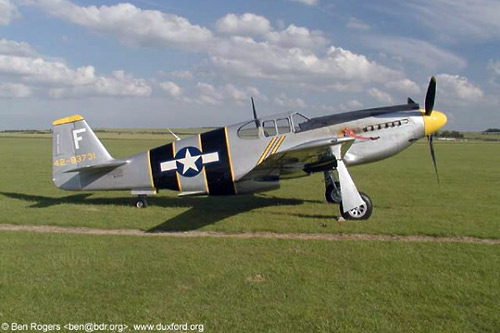 The A-36
by Curtis Fowles, MustangsMustangs

April 1942 marked the first order of any P-51 variant by the US Army. 500 NA-97s were ordered. The U.S. serials were 42-83663 to 42-84162. The P-51 was never intended to be a dive bomber. Budgets for pursuit fighters were limited at that time, but there were funds available for dive bombers. NAA's President, Dutch Kindelberger, made proposals for a quick design modification to the P-51 and landed a contract for 500.

The name of the A-36: It is hard, if not impossible to find reference the names given to the A-36 that have been published many times. It is mostly published that the official USAAF name is "Apache", but some P-51 historians refute this saying there are no documents that support that name. It was also called "Invader" and later mostly just "Mustang". I have found reference to the name "Invader" in an official USAAF film about the A-36 and one of the units that used it in Italy.

The design was very similar to the Mustang I and P-51A. The powerplant was the Allison V-1710-87. The A-36 was a dive-bomber so the addition of hard points for two 500 lb bombs and dive brakes to slow the fast acceleration of the P-51 in a dive were added. The belly scoop was now fixed at the front. Armament was 2 guns in the nose and 4 in the wings, all .50 caliber.

The dive brakes were operated hydraulically and located on the top and bottom of each wing outboard of the guns. Plan was that they limit the dive speed to 250 mph but in practice the speeds were closer to 350 mph and higher. The angle of dive was reduced to 70 degrees because of high stress during pull-out.

The hard points for the bombs were also capable of holding 75 gallon drop tanks for extended range. The top speed of the A-36 was down from added weight to about 358 mph at 5,000 feet (without external stores).

Only one A-36 was sent to the RAF for evaluation as A-36 EW998 in March 1943. The US used the A-36 in the Mediterranean theatre with first deliveries beginning in early 1943. When not in the ground attack role, the A-36 was essentially a low-altitude P-51A and was used as a fighter. The A-36 scored 101 air-air victories during WWII.

The A-36 proved to be a very stable platform for accurate weapons delivery. 177 were lost in action mostly due to the dangerous mission of low-level operations.