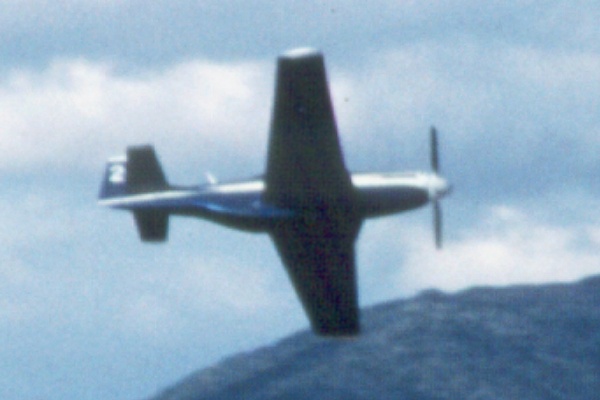 << Case # 61
Who?   Case # 62
Case # 63 >>
P-51 Who? Viewer Responses
Leo Smiley
John Wright's N51JW " Philippine Mustang" raced at Reno as #20. He was a bronze class winner in 1979. As I remember the aircraft also undertook a trans-pacifc flight with huge underwing tanks, hence the name. Unfortunately the aircraft was completely destroyed, John Wright and his wife killed when a low level roll went bad after a southwest airshow in 1982 just before the Reno races.
Wiliam D. Yoak
This aircraft was based in Reno,NV under the ownership of John Wright. Wright ferried it from the Philippines to Reno in September of 1971. It had been operated by the air force of the Philippines for several years and was owned by their government until Wright acquired it. He was a 747 Captain for Pan Am and a former U.S Air Force fighter pilot. Sadly, John and his wife--Barbara were killed in this Mustang a week before the Reno Air Races in 1982. They were doing a flyby over a parade in Elko, Nevada when Wright executed a roll at low level and struck a wingtip while inverted.
Mark Howard
That is John Wright's P-51.
David Soom
John had a co-owner in the Mustang that was accused of buzzing 2 young women resulting in their crashing in a car. A civil suit found him guilty. Can anyone remember this Co-Owners Name? He was a Reno Building contractor, I keep thinking Clyde..Something.
David Soom
David Soom
UPDATE:

John Wright's co-owner in the Mustang N51JW was Carl Barlow. 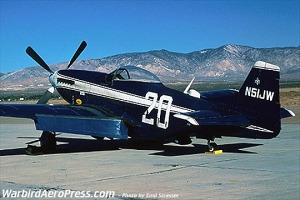